Scheffler's shank sums up his week so far at the Presidents Cup... 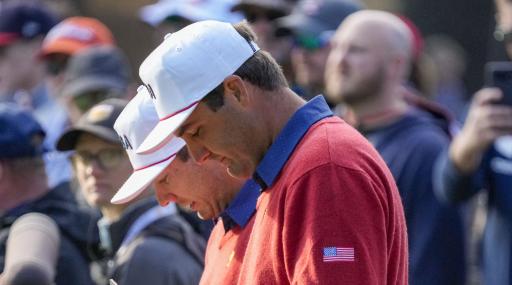 If a golf shot ever summed up World No.1 Scottie Scheffler's week so far at the Presidents Cup, it came with his tee shot on the par-3 10th in the Day 3 Morning Foursomes at Quail Hollow Club.

Scheffler, who was once again playing alongside his good friend Sam Burns, let go of his iron within seconds of making contact with his ball on the 10th tee as the crowd reacted in a state of shock.

The American duo went on to lose the hole and their match 2&1 to a pumped-up Tom Kim and KH Lee.

Kim, who twice had an unfortunate situation on Friday, thankfully did not have any issues with his trousers on Saturday.

Scheffler has now been dropped by United States captain Davis Love III for the afternoon fourballs session, as Billy Horschel joins Sam Burns for a match against Adam Scott and Cam Davis.

Burns and Scheffler had played together in all of the first three games, and they only managed to take a half point in the Friday Fourballs against Sungjae Im and Sebastian Munoz.

"I think when it's not going well and they keep putting him out there and they think they'll get a different result, when all he's got is half a point, so no, it's not a big surprise that they're not going back out there together again today.

"Sam Burns from tee to green is more consistent. Scottie gets a bit streaky, and he's a little on the low streak at the moment.

"But listen, they are still the best of friends, they just didn't win enough points."

Scheffler yesterday became the first World No.1 to not win either of his first two games at the Presidents Cup since Greg Norman in 1996.

The Internationals and United States shared the points in the morning foursomes on Saturday as the scoreline moved to 10-4 in favour of the Americans.

Next Page: Trevor Immelman explains his LOL response to Greg Norman on Twitter