A spectator was filmed picking up Xander Schauffele's golf ball as his Saturday afternoon fourballs match came down to the wire at the 2022 Presidents Cup. 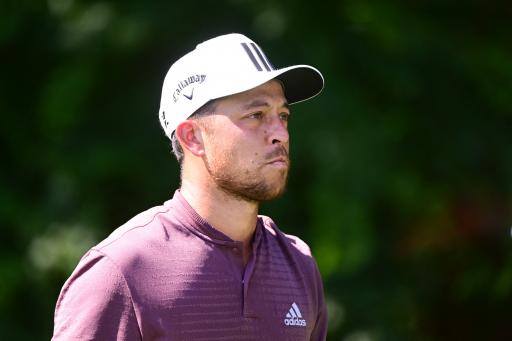 Xander Schauffele could have been forgiven for being a touch angry with this spectator at the 2022 Presidents Cup.

He was playing in the first match in the Saturday afternoon fourball session at Quail Hollow Club in Charlotte alongside his good pal Patrick Cantlay against the International pairing of Tom Kim and Si Woo Kim.

Their match had come down to the wire and the tide was beginning to turn in favour of Trevor Immelman's rest-of-the-world side, who had the opportunity to take the afternoon session 3-1.

Si Woo Kim had trouble off the tee but Schauffele, Tom Kim and Cantlay found the fairway.

Tom Kim - who keeps ripping his trousers - sent a towering, beautiful fade pin high and had a decent look at birdie.

Cantlay found the dance floor but his approach was less than spectacular.

Schauffele must have been feeling the adrenaline as his approach sailed over the back of the green. His golf ball took one bounce and hopped over the rope separating the spectators from the players.

It clearly was a tough up and down but things took an interesting turn when it was revealed that a spectator decided to simply pick up Schauffele's ball.

When this happened, he was frantically encouraged by those around him to put it back.

It led to a brief delay in play as Schauffele talked through the situation with a rules official.

Imagine a Broncos fan picking up a live fumble during the middle of Sunday Night Football tomorrow. pic.twitter.com/mK6jABpaSf

Schauffele was allowed to place his golf ball due to the outside interference. He saved par but Kim sank his birdie putt to win the match and then went absolutely ballistic.

The Rules of Golf state: "If your ball is moved by an outside influence, such as an animal or a spectator, there is no penalty to anyone and the ball must be replaced."