"Funnily enough I was more nervous playing Henrik Stenson that morning, and I didn't know why." 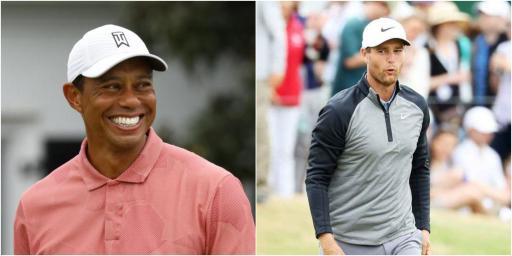 Even if you're a top player on the PGA Tour the chance to play with and against Tiger Woods is an experience you'll never forget.

Thousands of fans line the fairways to catch a glimpse and watch the big cat in action such is his draw.

And Lucas Bjerregaard is no different.

He's revealed the details of the "intimidating" handshake he got from Woods when they first met at the range.

The Danish professional, who has won twice on the European Tour, famously claimed a victory over Woods in the 2019 Match Play.

MORE: BRYSON PUMPS IRON AND CALLS OUT HIS FRENEMY BROOKS

Now 30 years old and with more than 200 professional events under his belt, he's been writing about his life for the European Tour.

"But Tiger was my idol, and he is the reason I got into golf," Bjerregaard wrote.

"I will never forget introducing myself before we played the quarter final at the Match Play back in 2019. I was walking past the range to get to the first tee and thought I better say hi, and I'll never forget the look and firm handshake he gave me.

"It was intimidating to say the least. Funnily enough I was more nervous playing Henrik Stenson that morning, and I didn't know why. I think it was the magnitude of it all and the amount of people following us.

"It was so much to take in and I don't think I even expected to have a chance to beat him. I've never played in front of so many people. Everyone screaming Tiger's name. It was surreal.

"Tiger had a short putt on 18 to extend our match, and I was halfway towards the next hole ready for the play-off.

"It's Tiger. He doesn't miss putts like that. But he missed, and the match was over. It was a very strange feeling. It took a while to sink in, but once it did, it was an amazing feeling.

"One I won't forget. I've seen him a few times since at Augusta and the PGA Championship and we've shared a few chats. He's a great professional. But that was another moment I'll always remember."

NEXT PAGE: WHAT ARE THE NAMES OF DECHAMBEAU'S WEDGES?