Ernie Els is playing in his first-ever Senior Open Championship at Sunningdale this week. 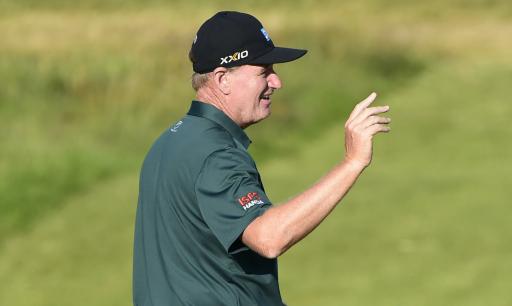 Ernie Els is participating this year and it will be his first-ever appearance at the tournament. As we know, Els loves playing golf on these shores, which is shown by his two Claret Jugs from 2002 and 2012.

Jim Furyk won the US Senior Open two weeks ago and he has understandably been installed as the bookie's red-hot favourite to take another title in England this week.

As I have stated there, Els has been a fantastic and successful visitor to golf in Britain. In 2002, he won a playoff to win The Open Championship at Muirfield and he added another Claret Jug in 2012 at Royal Lytham and St. Anne's.

Although he has never played in the Senior Open, he did play last week at Royal St. George's, carding two 72's to miss the cut by three shots.

The South African hasn't won since October 2020, but he has had a pretty solid run with a fifth-place finish at the Bridgestone Senior Players, a solo second at the DICK'S Sporting Goods Open and a finish for tied 17th at the U.S. Senior Open.

Kelly can be relied upon to finish in the top 10 every week and this is a key reason as to why he is ranked first in the Schwab Cup.

He has two wins, two runner-up finishes and 13 top 10's this season, which is absolutely superb form. He's finished inside the top 10 in seven of his last eight starts including a tied eighth in his last start at the U.S. Senior Open.

Much like the PGA Tour, this is the last major of the year and Kelly should again be in the mix at what should be a competitive week in Ascot.

The Englishman has a great track record at the Senior Open Championship. On his debut at the tournament in 2016, he won at Carnoustie and then finished second in 2019.

This record suggests that he should be a force to be reckoned with in this year's event. Broadhurst has four top 10's this season including one recently at the Bridgestone Senior Players, so 40/1 for a man with his experience is more than attractive.