"I feel I'm never out of the fight," admits Tiger Woods in the first episode of his new 'A Round With Tiger' series on GOLFTV... 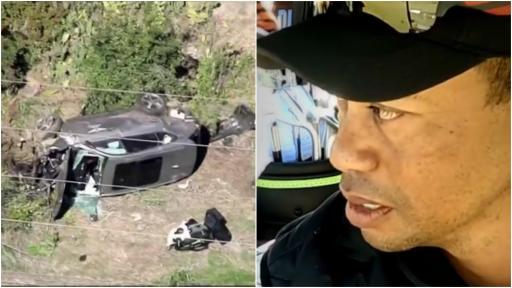 New video footage has emerged of Tiger Woods less than 24 hours before his horror car crash in Los Angeles back in February, after Woods gave his blessing for the content to be released to the public.

Episode One of 'A Round With Tiger' - available to watch on GOLFTV and filmed in partnership with Golf Digest - went live on Tuesday and it saw Woods giving actress Jada Pinkett Smith, wife of Hollywood star Will Smith, a golf lesson at Rolling Hills CC in California.

The footage was filmed just a day before Woods suffered traumatic leg injuries when losing control of his vehicle, crashing into a tree off the side of the road on the morning of February 23.

It was later confirmed the former World No.1 had been doing nearly double the speed limit on the road, but that there was no sign of impairment while driving.

Woods has now had surgery to treat his leg and is now recovering at home in Florida. It is still unknown as to whether he will ever return to the PGA Tour.

In the first episode of Woods' new series with GOLFTV, the 15-time major champion discusses his incredible career with Pinkett Smith before offering her some advice about her golf game.

At the time of filming, it's fair to say Woods looked a little downbeat about his health as he continued to recover from his latest back surgery that he underwent at the end of 2020. That was evident as he did not hit one single shot during the filming.

Smith told Woods how inspired she had been to take up the game ever since she watched Woods win his 15th career major at The Masters, overcoming all odds at Augusta National.

"Your last Masters that you won, Will (Smith) calls me, he says, 'Turn the TV on right now Tiger is about to make history'," Smith tells Woods.

"So I turn the TV on and I'm watching, and you win. I just get so emotional just thinking about it all. I'm like, 'Tiger's back! Like, he did it!'"

Woods disagreed: "See, I don't see it that way."

Smith replied: "'I know you don't, but you wouldn't because it's your journey... but those of us who are looking on the outside, it's amazing. So that day I said, 'This game has something for me,' and that's the day I started taking this game seriously."

Smith then received some advice on her game from Woods out on the range, before the pair discused getting older. Woods once again returned to his "fight".

"You're right about the wisdom part of it but I've had 10 operations," said Woods.

Smith replied: "But I have to be honest with you, that's the part in regards to your journey that has been amazing. What you've overcome, it's so inspiring."

Woods responded: "I just want to see if I win. I just don't look at like that. I just look at the fight."

Woods then smiled and said: "Fun."

RELATED: TIGER WOODS PICTURED FOR THE FIRST TIME SINCE HIS HORROR CAR CRASH

Smith then asked Woods where his resiliency comes from, and he replied: "'That's all I know. I feel like I'm never out of the fight. I'm always pushing and the body definitely knows it.

"For me, I always thought I wasn't the most talented so I felt like I had to work my a** off. I wanted to become better."

New episodes of A Round with Tiger: Celebrity Playing Lessons are set to be released weekly, with Tiger being joined by a new guest in each of the first three weeks and the series concluding with a Behind-The-Scenes episode.

Woods will next be joined by Dwyane Wade and then by David Spade.

Fans around the world (excluding the US) can enjoy A Round with Tiger: Celebrity Lessons exclusively on GOLFTV. Fans in selected European markets will also be able to watch the series on Discovery+ from July 29.