Shane Lowry rues the worst break of his PGA Tour career when playing the final hole at The Honda Classic. 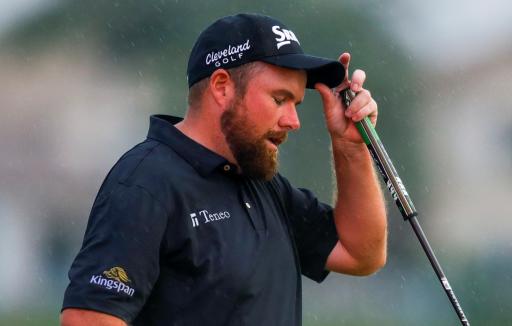 Shane Lowry believes The Honda Classic was "stolen" from him after a late rain shower down the 72nd hole saw him finish runner-up to Sepp Straka at PGA National.

Lowry found himself with a one-shot lead with three holes to play as he went in search of landing a hat-trick of wins on the PGA Tour and his first since the 2019 Open Championship.

Straka then birdied the 16th up in the group ahead, and the pair were tied heading down the last.

Lowry was forced to brush home a four-footer for par on the 17th as the rain started to bucket down.

While this was going on, Straka was striding down the fairway on the par-5 18th having already smashed his drive over 330 yards, leaving a flick with a short-iron into the green.

Straka found the dancefloor and two-putted for birdie to post 10-under par in the clubhouse, one shot clear of Lowry back on the tee.

With the rain teaming down and wind into his face, Lowry found the left rough and was forced to lay up into the fairway.

The Irishman could only send his approach shot to 40 feet and he would two-putt from there for par to come up one shy of Austria's first-ever winner on the PGA Tour.

"Yeah, it's hard to take, to be honest, I feel like I've got the tournament stolen from me today," said a disgruntled Lowry.

"You know, he's gone 3-under the last five on this course. I played the golf perfectly to win the tournament, and that's this game sometimes and that's this level. He finished well.

"Yeah, the last hole was - that was as bad a break as I've ever got. You know, especially when you're standing on the tee and you see him over that left bunker, which I would've been able to do if there was no rain, because I need a drive and a 4- or 5-iron. Probably would've given myself a better chance with a four.

"Look, it is what it is. It's a great week for me. I'm very happy where my game is at. It's a really nice week to take into The Players Championship now."

RELATED: HOW MUCH DID EACH PLAYER WIN AT THE HONDA CLASSIC

On top of a first win in three years on the PGA Tour and valuable FedEx Cup and World Rankings points, the untimely rain shower also cost Lowry close to $600,000 in prize money.

Lowry, who still walked away with $872,000 for his efforts, is hoping the bad break irons itself out come April.

"Hopefully in about five or six weeks at Augusta," smirked Lowry.