Sepp Straka: What's in the bag of the latest PGA Tour champion?

Sepp Straka won his first PGA Tour event at the Honda Classic after overturning a five-shot deficit on Daniel Berger in the final round. 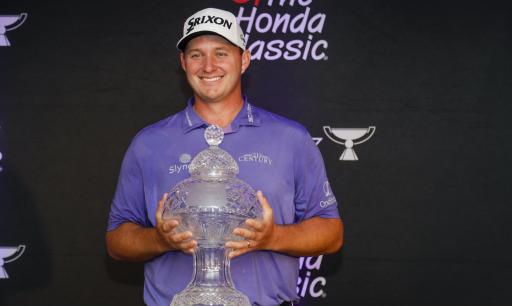 It should've been Daniel Berger's day at the Honda Classic on Sunday. With a five-shot lead, he was primed to win his fifth PGA Tour title.

But his extensive advantage unravelled on the front nine and the chasing pack caught up. One of them was Sepp Straka who was looking for his maiden PGA Tour title.

Although he made two bogeys on the front nine, he also made three birdies. Berger made a double-bogey and two bogeys in his first six holes.

It was the back-nine of Straka which clinched the title for him at PGA National. He played his final nine holes bogey-free and he added three birdies in his final five holes, playing the Bear Trap in 1-under-par.

Berger valiantly battled away but he made a bogey on the 12th hole and a bogey at the 18th hole, while chasing an eagle to force a playoff, which meant he shot a 4-over-par 74 to finish three behind the eventual winner.

The 28-year-old became the first Austrian to win on the PGA Tour. He has risen to 14th in the FedEx Cup standings and 83rd in the world rankings.

Sepp Straka - What's in the bag?