Golf fans and Eddie Pepperell react on Twitter as new information comes to light about what happened in the alleged Patrick Reed "cheating" incident on the PGA Tour. 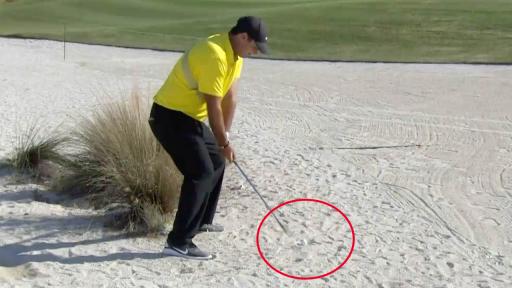 Some incredible new information has come to light today involving the alleged Patrick Reed "cheating" incident during the third round of the Hero World Challenge in December 2019.

The informaton has come from @useGolfFacts on Twitter, which according to multiple reports this year is actually an account affiliated with Reed, his family and team.

It is believed that Reed's wife Justine manages the account.

The reasons for this are fairly self explanatory given the majority of tweets and replies on the account are in defence of Reed's actions.

You may recall this was the account that posted the exact same tweet about Rory McIlroy's "embedded" ruling fiasco at this year's Farmers Insurance Open (end of January; see above tweets).

This fell during the same week Reed himself was being ripped by golf fans on social media who considered he had got away with picking up his ball from what was deemed an "embedded" lie in the thick rough - CLICK HERE.

So what's the latest then?

Well @useGolfFacts, which has just shy of 20,000 followers on Twitter, today responded to European Tour pro Eddie Pepperell's tweet from that week at Torrey Pines exactly nine months ago.

Many episodes… No. “The Sand” incident- An expert forensic videographer broke that down... Altered footage from a copy of LIVE broadcast…from his actual shot to the shot shown in replays- basically DIGITALLY ALTERED to publicly smear and cause damages to PREED. pic.twitter.com/pvNuVVehAr

"Of course it can be true that in the case of Patrick Reed he *may* have cheated, but that doesn’t mean he always cheats," tweeted Pepperell on January 31.

"I’ve played with Patrick and was astonished at how skilful a golfer he was. This is why it’s so sad that there are so many episodes like this with him..."

The reply from @useGolfFacts today did not choose to discuss what happened at Torrey Pines, but instead speak about Reed's shot from the sand during the third round of the 2019 Hero World Challenge in the Bahamas from December 2019.

"Many episodes… No," tweeted @useGolfFacts.

"'The Sand' incident - An expert forensic videographer broke that down... Altered footage from a copy of LIVE broadcast…from his actual shot to the shot shown in replays - basically DIGITALLY ALTERED to publicly smear and cause damages to PREED."

Click on the above images to see a full description of what the forensic videographer looked into.

One golf fan wrote: "This is a stretch", to which @useGolfFacts responded: "I wish It was. But it’s not a stretch by any means. Over 180 hours went into this. It’s very clear."

As you can imagine, it's now all kicking off on social media with golf fans from all over the world getting involved and having their say.

What is more impressive is she still thinks that no one knows it's her from this account.

That’s not photoshop hahaha that’s a picture of their replayed broadcast. Thank you for proving the point.

Aha. Who hired this “forensic videographer”? Who is he/she? Why would the network re-air footage that didn’t come directly from its proprietary footage? Why wouldn’t the PGA make a stmt? Why wasn’t a complaint filed by PReed. Because it’s BS Justine. That’s why.

So yes, a quite astonishing claim from the @useGolfFacts account in that the pictures from the broadcast were "digitally altered to publicly swear and cause damages" to Reed, and that "over 180 hours" went into it all.

Reed was strongly accused by golf fans, and golf analysts at large, of deliberately improving his lie, not once but twice.

The American was docked two strokes for his actions in the sand for violating Rule 8.1a (4), which states that a player is not allowed to “remove or press down on sand or loose soil” in order to improve the conditions affecting the stroke.

The eventual two-shot penalty, which was assessed after his round, turned Reed's 72 into a 74, and it would ultimately prove costly as he finished third and two shots behind eventual winner Henrik Stenson.

Team Reed has certainly hit back strongly here and it will be very interesting to see what happens.

There is certainly plenty that needs to be answered here, especially from the PGA Tour and its broadcasters as to whether this is indeed true.

No doubt there will be more on this over the coming days.

NEXT PAGE: PGA TOUR FAILS TO FILL ITS FIELD AT THIS WEEK'S BERMUDA CHAMPIONSHIP