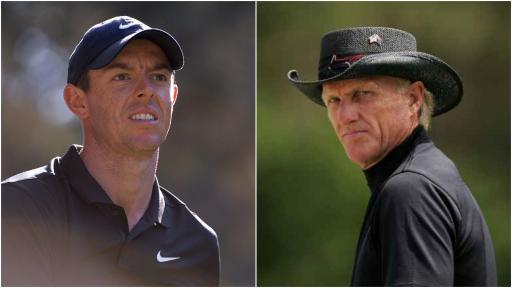 Golf media members were invited to a private meeting in New York that outlined plans for a new Saudi-backed golf series today, according to a report in Golfweek.

Multiple people in the industry are said to have leaked the information to the publication.

Members that attended had been asked to keep such information to themselves until next week, but clearly the cat has now been let out of the bag.

It is understood, according to the insiders, that two-time major champion and former World No.1 Greg Norman will be announced as the commissioner of the new circuit.

The man nicknamed the Great White Shark won 20 times on the PGA Tour during his career.

Despite previous plans for a Premier Golf League backfiring in recent months as a result of the PGA Tour and European Tour forming a strategic alliance, it is unclear as to what form of league will be laid out in the latest plans.

Golfweek, despite publishing the news, were not invited to the meeting.

Details of this new Saudi-backed series, led by Norman, will be fully announced next week claims the report.

The news comes just a couple of weeks after the incredible Saudi takeover of Newcastle United Football Club.

With no doubt millions of dollars ready to be unloaded on a new golf circuit, it will be very interesting to see whether the likes of Rory McIlroy, Bryson DeChambeau, Jon Rahm, Justin Thomas, Rickie Fowler and even Tiger Woods become tempted to join.

Earlier this season, PGA Tour commissioner Jay Monahan made it clear that any player ship to either a Saudi-backed PGL would lead to an immediate suspension from the circuit, and likely a lifetime ban.

The PGA Tour and European Tour will no doubt have their say on matters very soon, but neither has yet made a comment following today's news.

NEXT PAGE: SHOULD DUSTIN JOHNSON BE ASHAMED OF ASKING TO PLAY IN THE SAUDI INTERNATIONAL?