Should smoking be banned on the European Tour and PGA Tour?

Should smoking be banned on Tour in order for golf to get the sporting recognition it deserves? 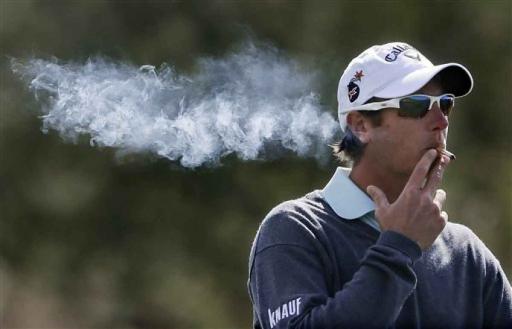 Nicolas Colsaerts won his first tournament since 2012 last week, winning the Open de France at Le Golf National. It was an emotional victory for Colsaerts, who was fighting to save his European Tour card having dropped seriously low in the world golf rankings. What some people picked up on was that Colsaerts was smoking during his round and it was difficult for the cameras to avoid as he was at the top of the leaderboard.

Now Colsaerts isn't the only golfer who smokes, but those working on the cameras at events on the European and PGA Tour do their best to avoid showing players smoking as there are young fans who may be watching and it can set a bad example.

Not only is smoking addictive and Colsaerts may enjoy cigarettes for many reasons, they also calm your nerves, as does chewing tobacco, something that a few players on the PGA Tour have been called out on in the past.

Here is the PGA Tour's stance on smoking and the chewing of tobacco: 'Currently, the PGA TOUR does not have a policy against chewing tobacco or cigarettes. However, we do ask our players to be a little more discrete, keeping in mind that they may be being watched by a young audience both on the golf course and television.'

Seeing Colsaerts enjoying a few cigarettes during his final round on Sunday caused a stir on social media, with some saying if there's no policy on smoking on Tour then it shouldn't matter, while others raised their concerns with the example it would set on the younger viewers.

The @EuropeanTour should ban pros from smoking on the course during tournaments - sets a very bad example for youngsters watching their idols.#colsaerts #OpenDeFrance

Darren Clarke is another player who used to smoke while playing on the European Tour, as did Angel Cabrera and John Daly. I'm sure most of you have seen many images of Angel Jimenez pulling out a large cigar after his round, but he too would sometimes smoke while playing.

Golf is of course a sport that is taken very seriously, but it doesn't exactly require the level of fitness that you see in sports like football or other high intensity sports, so the damage that smoking does to your body arguably doesn't matter as much to golfers, but it does set a bad example to the future of the sport.

Brooks Koepka was seen chewing tobacco while defending his US Open title at Pebble Beach earlier this year, another way of calming your nerves, but due to him being televised so much, cameras couldn't help but pick up Koepka spitting on the course, which a lot of viewers took offence to.

In the UK, smoking has been banned in all public places and work spaces since 2007 and it's a habit that most smokers themselves will tell you they wished they had never started.

Even on packets of cigarettes, you'll see a huge warning sign or a graphic picture of the damage that smoking can cause. I'm sure every parent, even those who smoke, hope that their children don't get into the expensive habit.

So with all the effort that goes into slowing down the number of smokers and stopping future generations from picking up a cigarette, should the PGA and European Tour put a ban on smoking?