Golf fans have reacted on social media to the news that Sergio Garcia has re-joined TaylorMade Golf. 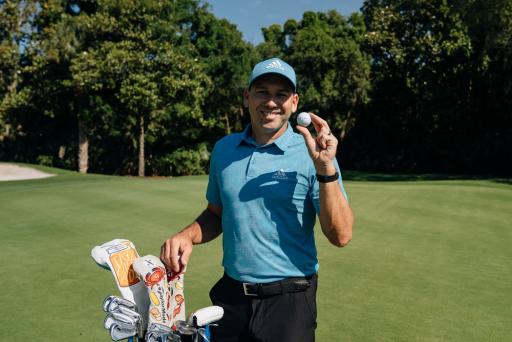 News broke on Tuesday that Sergio Garcia has re-signed with TaylorMade Golf and now golf fans have had their say on the topic on social media.

With pen put to paper before the start of the PGA Championship this week, Garcia will tee it up at Kiawah Island's Ocean Course with the same TaylorMade bag as his new teammates, such as Rory McIlroy, Dustin Johnson and Tommy Fleetwood.

The Spaniard has one major to his name after he won The Masters back in 2017 and Garcia will be hoping that a return back to the brand he spent 15 years with previously in his career can help him add another major trophy to his cabinet.

"Some of my fondest on-course memories have come with a TaylorMade club in my hands and a TaylorMade golf ball on the tee," Garcia said after the re-signing was announced. "I am excited about the future, especially with the Olympics and Ryder Cup on the horizon, and I know that TaylorMade will help me achieve the absolute best possible results. I’ve always been comfortable with their team, their approach to the game and their equipment, especially their golf ball. I couldn’t be more excited to rejoin a group I consider family."

RELATED: Take a look at what TaylorMade clubs Garcia will use at the PGA Championship

The TaylorMade team were also pleased to get Garcia back on their team, who brings a wealth of experience to their star-studded roster.

David Abeles, CEO, TaylorMade Golf, said: "The opportunity to reunite with Sergio is one we couldn’t let pass by. Over the course of nearly two decades, we’ve built a deep connection and familiarity. He understands the history of our brand, the performance of our products and who we are as a people. We truly welcome his return to Team TaylorMade."

It seems Garcia is happy, TaylorMade is happy, but what do the fans think? Well there were plenty of comments on social media after the news broke earlier on Tuesday.

"Always played his best stuff with TaylorMade so don't blame him, especially with the Ryder Cup on the horizon."

"Yes Sergio!!! Back where you belong."

NEXT PAGE: Our TOP BETS for the 2021 PGA Championship