These two long drivers became pals in the run-up to the world championships and now they are training together... 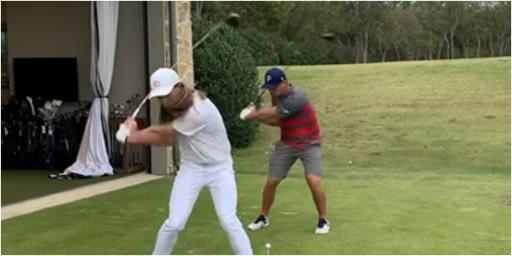 Bryson DeChambeau and long drive world champion Kyle Berkshire have been keeping busy in the off season.

DeChambeau, 29, is currently taking some time away before he begins his PGA Tour season but he's still working hard it seems.

And the two pals have been doing some long drive training and were hitting some balls in between shooting for their sponsors.

Both are sponsored by Cobra and were in Dallas, Texas, filming content with Rickie Fowler and LPGA Tour star Lexi Thompson.

The pair were filmed smashing drives together and in one they manage to sync up perfectly.

Take a look at the video below posted on Kyle Berkshire's Instagram page:

Just look at that.

Both players catch their drives as sweet as a nut and give a little club twirl before walking after it.

It will be interesting to see what sort of content they have filmed.

Both have appeared on each others' YouTube channels after DeChambeau decided to take up long drive.

DeChambeau finished in the top 10 of the Pro Long Driver's Association World Championship immediately after the Ryder Cup.

Berkshire, 24, became the champion for the second time.

NEWS: PAIGE SPIRANAC HAS A MESSAGE FOR THE HATERS