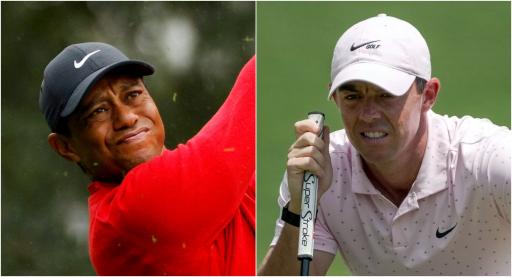 Happy Gilmore is a legendary golf film that every golf fan has seen and TaylorMade put on a great challenge for six of the world's best players to take on, inspired by the movie.

The challenge was simple: take a step back from the ball and in the Happy style, run up to the shot and hit the drive as far as you can. It is fair to say that there were some mixed results.

As the rest of the players took practice swings in the background, Tiger Woods stepped up first in his Happy hockey shirt and he calmly took his swing and faded his drive beautifully down the middle of the driving range.

The 15-time major champion made it look very easy, which was in contrast to Rory McIlroy who struggled to strike his ball out of the middle of the clubface.

The Northern Irishman took the most drives out of each player as he was determined to hit a solid shot. He rolled up his sleeves and took big run-ups to his ball, but he failed to truly connect.

The TaylorMade team were using a GC Quad launch monitor to track the yardages of the players' shots and at one stage, McIlroy hit one of his drives so far out of the toe of the clubface that his ball hit the launch monitor.

The Happy Gilmore run-up style was arguably more difficult for Matthew Wolff, who has an unorthodox set-up and swing, and it showed as the 22-year-old hooked his first drive across the practice ground.

Two-time major champion Dustin Johnson teed his ball up very low when taking on the challenge, which resulted in a low, stinging drive that did not stay in the air for long.

Tommy Fleetwood and Collin Morikawa also put in valiant efforts but it just goes to show, the Happy Gilmore challenge is tough even for golfers at the top level of the sport.