Brooke Henderson makes HISTORY in second round of Evian Championship

Brooke Henderson led the Evian Championship by three shots in France on Friday, becoming the first player to open a women's major with two rounds of 64 or better. 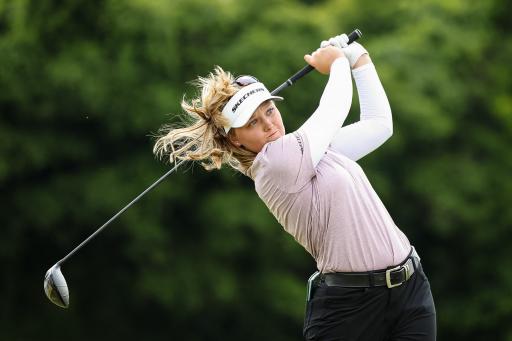 Brooke Henderson was foot-perfect in the first two rounds of the Evian Championship, so much so that she now owns her own little piece of LPGA Tour history.

After carding a 64 on Thursday, Henderson carded another 64 on Friday to become the first ever player to record scores of 64 or better in the first two rounds of a women's major tournament.

The Canadian made eight birdies and just one bogey during yesterday's play at the Evian Resort Golf Club. After 36 holes, she led by three shots from American Nelly Korda.

"You know, it feels really nice to get off to a fast start in a major championship. Feels like it's been a while. To get it this far under par is really awesome," said Henderson after reaching 14-under through two rounds.

What a week it's been for @BrookeHenderson

11-time LPGA champion has the lead at @EvianChamp heading into the weekend! pic.twitter.com/sUC1rlGXYs

"And I feel like I'm hitting the ball really well, which is nice. Making some putts. So two solid days, and I'm just really looking forward to the weekend.

"It would be amazing to get my second major championship, and hopefully I get a few more before my career is over."

At the age of 18, Henderson won the Women's PGA Championship in 2016. This is her only major victory up till now and she also has 10 other wins on the LPGA Tour.

The 24-year-old has enjoyed a solid season in 2022, making six top-10 finishes and winning the ShopRite LPGA Classic presented by Acer back in June.

She is 10th in the Rolex Rankings and fourth in the Race to the CME Globe and with just over $9 million in career earnings on the LPGA Tour. She could be looking at her second major trophy come Sunday afternoon.