Tiger Woods and his son Charlie came seventh in the same event in December 2020. 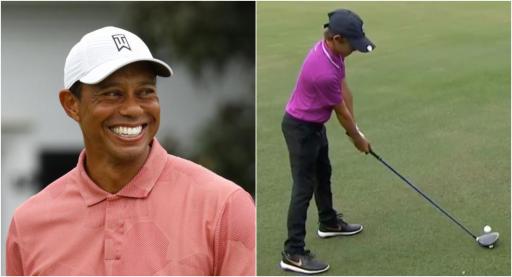 Tiger Woods and his son Charlie Woods could sensationally return to the PNC Championship, the unique PGA Tour family event in which the duo played last year.

According to Golfweek, sources have confirmed that the PNC Championship is keeping a spot open in case Woods and his young son decide to participate.

Woods is still in recovery from the car crash he was involved in earlier this year and the organisers of the tournament had assumed that the 15-time major winner would be unable to participate.

A source told Golfweek: "The message came: not just yet!" This supposedly came from a source who is familiar with Woods' current situation.

The PNC Championship sees 20 major champions pair up with a member of their family. The format is as follows: on each hole, each player drives and the best drive is chosen.

Each player then plays a second shot from the spot where the chosen drive is and the best second shot is selected. This process is repeated until the hole is done.

The tournament is being held on December 18 and 19 and there is also a Pro-Am on December 16 and 17. It is played at the Ritz-Carlton Grande Lakes in Orlando.

So far, 18 teams have been announced which means just two slots remain and there is a chance that one of these could be filled by Woods and his 12-year-old son Charlie.

Charlie was extremely impressive when he played in the tournament last year, displaying many traits and mannerisms that his legendary father has shown down the years on the PGA Tour.

The 82-time PGA Tour winner excited golf fans when he posted a video of himself hitting balls on the driving range earlier this week, still with a black protective cast covering his right leg.

This sucked in all sorts of speculation as to when Woods could return to competitive golf, so keep an eye out for who takes the last two spots at the PNC Championship.