Brooks Koepka vs Bryson DeChambeau: How to watch The Match, betting odds & tips

Will this finally be settled? 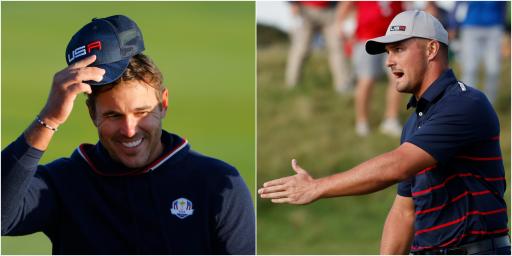 It's nearly go time for the fifth edition of The Match starring Brooks Koepka against Bryson DeChambeau.

The pair of high rollers will peg it up at the Wynn Golf Club not far from the blackjack, roulette and poker tables on the Las Vegas strip.

Depending on your thoughts, this will either be a few hours of tedious banter or light-hearted fun.

Phil Mickelson is on the mic, talking smack alongside his former Match team mate Charles Barkley.

But how can you watch this and what time will it kick off?

You can watch it on: TNT, TBS, truTV and HLN.

A separate platform for UK viewers has not yet been announced.

It's being held at: The Wynn Golf Club, Las Vegas

Who's commentating? Phil Mickelson and Charles Barkley, with Amanda Balionis the on-course reporter

The format: It's a 12-hole match play

Bryson DeChambeau is the favourite. Just.

Koepka to hit the longest drive is 4/1.

The match to be decided before hole nine pays 11/2.

Who we are tipping?

The fact that this is only 12 holes makes this a bit more unpredictable. In our view, you just have to look at form. DeChambeau is the slightly better golfer as of right now and he has experience in this kind of event. We are backing DeChambeau.

Koepka: "I think I've said it like 10 different times, I mean, I've never really liked him. He said that stuff to (my caddie) Rick and I just thought it was crap. You don't go ask my caddy to go say something to me; come find me. Don't be a little baby about it. I think he's learned his lesson."

DeChambeau: "This is all real from my end, at least. It's disgusting the way the guy has tried to knock me down. There's no need for it in the game of golf. He has been trying to knock me down at every angle, every avenue, every way. For what reason? I don't know. Maybe it's because he's jealous."