Tony Finau is still riding high off the back of his win at the Northern Trust and he received a lot of messages from friends and family, including a legend of golf. 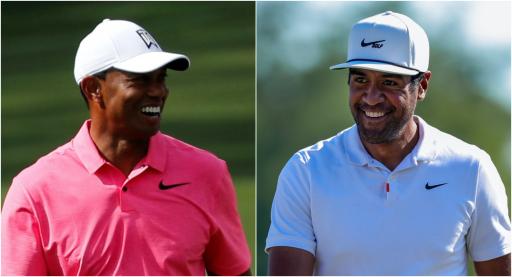 Tony Finau received a series of well-earned messages of congratulations and support from his friends and family after winning the Northern Trust at Liberty National.

After securing his second PGA Tour victory and his first win on the tour in nearly 2,000 days, one of the first golfers to message him was none other than 15-time major winner Tiger Woods.

Woods is still recovering from injuries that he sustained in a serious car accident in California in February, and he was last spotted in Los Angeles at the end of July.

"He was one of the first, which means he was watching which for me is very, very cool so I have to throw that out there as one of the top ones, and then countless other athletes."

Other American athletes such as Donovan Mitchell and Mike Conley, who play for Utah Jazz in the NBA, also congratulated Finau for his victory in New Jersey.

The floods of support for Finau show how popular he is on the PGA Tour. He was delighted to show that not only can he win multiple events on tour, but he can perform when the pressure is on on the big stage.

The 31-year-old earned 2000 FedEx Cup points in the first leg of the Playoffs to climb to number one in the standings. He is now in great shape to qualify for the Tour Championship and pick up the huge cash prize of $15 million for winning the FedEx Cup.

NEXT PAGE: RORY MCILROY LOSES HIS COOL AND THROWS HIS 3-WOOD INTO THE TREES!