Tony Finau was ecstatic after his win at the Northern Trust, so much so that he found himself still awake at 3.00 am and still hungry. 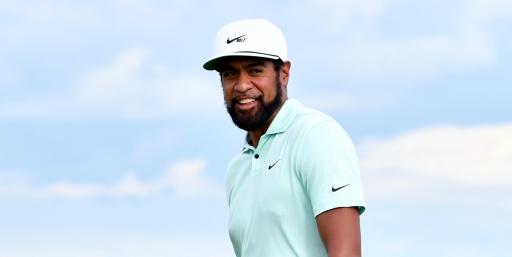 As he rolled in his short victory putt on the final green to beat Cameron Smith in a playoff, he breathed a sigh of relief and joy, a feeling he had not felt since the Puerto Rico Open in 2016.

In the evening, the 31-year-old and his team went out for a celebratory meal and after leaving the restaurant at 11.00 am, he still couldn't sleep and he was still hungry.

"I couldn't really sleep. I was still on quite a high, which was cool," Finau told the media at the BMW Championship.

"I had no problem cleaning all of it up."@TonyFinauGolf was too pumped up after his win to fall asleep ...

He grabbed a late-night victory snack instead. pic.twitter.com/Gc0T0wZL9w

"Then about 3:00 a.m. came around after returning some messages, talking to some family, and then Boyd (his coach) and I got hungry again so we went to McDonald's about 3:00 a.m. and got some fast food.

"I had a lot. I ordered a Big Mac, I had a Double Quarter Pounder with cheese and then 10 chicken nuggets. It reminds me of when I was a kid and I had large fry with Oreo McFlurry and bottled water. And I had no problem cleaning all of it up."

Finau may be a fine-tuned and fully fit athlete, but everyone is entitled to let loose and treat themselves to some fast food, especially off the back of a massive personal achievement.

The man from Salt Lake City is now ranked number one in the FedEx Cup standings and will tee it up with Jon Rahm and Cameron Smith in the first round of the BMW Championship later today.

NEXT PAGE: RORY MCILROY LOSES HIS COOL AND THROWS HIS 3-WOOD INTO THE TREES!