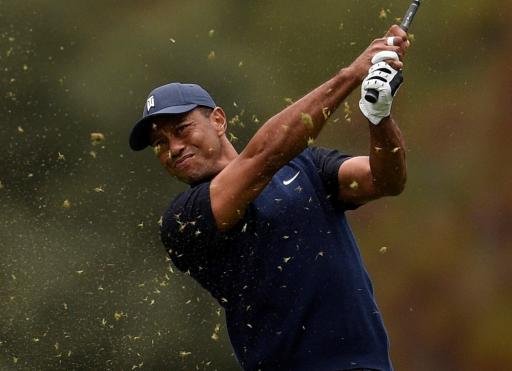 Tiger Woods' ex-wife Elin Nordegren and his girlfriend Erica Herman united to watch Woods and son Charlie Woods in action at the PNC Championship on Sunday.

Charlie, the son of Elin and Tiger, became the youngest player aged 11 to compete in the annual 36-hole tournament for major champions and their sons.

Team Woods played some fantastic golf over the weekend with consecutive rounds of 62 in the low-scoring scramble format as they ended up seventh in the 20-team exhibition.

Charlie produced one of the shots of the week with a stunning fairway wood from outside of 175 yards at the par-5 3rd hole, and he duly drained the putt from five feet for his first eagle in competition - WATCH HERE.

He was even seen emulating his father's famous fist pump when holing a birdie putt in the final round:

Charlie has learned a thing or two from his father. @PNCchampionship pic.twitter.com/9JOfGzS5pz

Justin Thomas and his father Mike ran out one-stroke winners over Vijay Singh and son Qass following a sensational final-round 57.

"Memories we'll have for our entire lives," said Woods of his first competitive outing with son Charlie. "'He's not going to appreciate this at 11 years old. I didn't when I was with my dad. As the years go by, you start appreciating it more."

Nordegren, who split from Woods in 2010 (six years after marrying), was pictured attending a golf tournament for the first time since the 2009 Presidents Cup.

Nordegren has since moved on with former NFL star Jordan Cameron, with whom she welcomed a child last year.

Woods has been dating Herman, a former manager at his Florida restaurant, since 2017.

NEXT PAGE: HOW MUCH ALL THE TEAMS WON AT THE PNC CHAMPIONSHIP