Video of Tiger Woods and son Charlie's mannerisms will blow your mind!

The PGA Tour posted a video showing the similar mannerisms of Tiger Woods and his 11-year-old son Charlie. 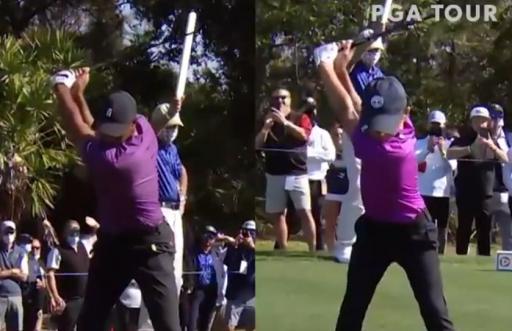 Golf fans have had their minds blown after the PGA Tour posted a video on social media showing the similar mannerisms of Tiger Woods and his 11-year-old son Charlie.

Having a 15-time major champion as your dad is of course a pretty good start when it comes to learning how to play golf and it's clear that Charlie has picked up and inherited a few of his old man's traits.

WATCH THE VIDEO BELOW TO SEE THE CRAZY SIMILARITIES BETWEEN THE TWO:

Woods will no doubtedly help Charlie as much as he can and support him on whatever path he chooses for the future, but it sure is incredible to see so much of Tiger in his son's game.

The father and son duo recently starred in the PNC Championship, which featured 20 teams made up of major champions and winners of the Players Championship, who partner with a family member for the two-round scramble event.

It was an extremely entertaining tournament at Ritz-Carlton Golf Club in Florida, which saw World No.3 Justin Thomas and his father Mike win the event, beating Vijay Singh and his son Qass by a single stroke.

Team Woods finished in seventh place and the pair produced some memorable moments, especially when young Charlie played an incredible drawing shot around some trees and tapped the ball in for eagle.

"Memories we'll have for our entire lives," Woods said. "He [Charlie] is not going to appreciate this at 11 years old. I didn't when I was with my dad. As the years go by, you start appreciating it more."