Billy Horschel decided to dress up as a human target ahead of the Farmers Insurance Open at Torrey Pines and "got hit pretty good". 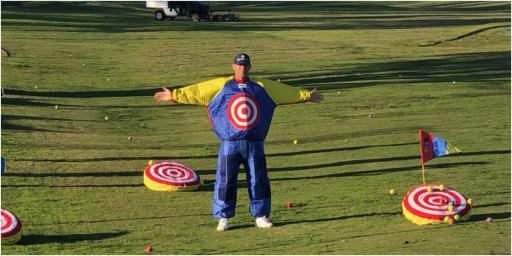 Billy Horschel got into the spirit of things on the range ahead of the Farmers Insurance Open on the PGA Tour.

Horschel, 35, took to social media to show himself dressed up as a human target. And he said he got hit pretty good.

But that didn't stop Horschel from smiling though, who was dressed up in a blue, red and white costume.

It was a win that he thought could seriously put him into contention for a Ryder Cup selection for Steve Stricker's side.

He wasn't selected and later told how that snub left him with some "fire in the belly" going into 2022.

Target practice with the kids! Got hit pretty good- but that’s what it’s about! @FarmersInsOpen pic.twitter.com/XL1t1CT1jT

Horschel didn't play a full schedule during the fall swing on the PGA Tour.

He did, however, play at the World Wide Technology Championship in Mayakoba, Mexico, where Viktor Hovland won.

Horschel followed that by finishing 23rd at the Tournament of Champions in Hawaii and 36th at the Sony Open.

Horschel finds himself priced at 90/1 with UK bookmakers to grab a victory at the notoriously difficult Torrey Pines.