Tiger Woods had a STAGGERING NUMBER of wins before Tom Kim was born...

Tom Kim was born on June 21, 2002, and by then, Tiger Woods was winning PGA Tour events and major championships as regularly as clockwork. 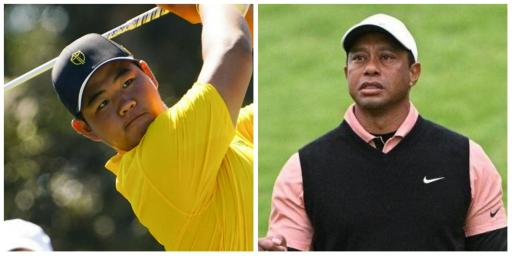 Tom Kim met Tiger Woods in an official capacity for the first time this week at the Hero World Challenge after gaining an invitation to the exclusive 20-man event.

He took a picture with the 15-time major champion at the 2020 USPGA Championship at Harding Park, but he finally got to speak to him this week at Albany Golf Club.

When Kim won the Shriners Children's Open at the start of this season, he became the first player to win twice on the PGA Tour before the age of 21 since Woods in 1996.

Woods was 20 years, nine months and 21 days old when he completed victories at the 1996 Shriners Children's Open and the 1996 Walt Disney World Golf Classic.

These victories came a number of years before Kim was born and they were the first two of a staggering 32 victories that Woods picked up before Kim was presented to the world on June 21, 2002.

To put this into context, this is three more than Lee Trevino managed in his entire Tour career, eight more than Gary Player and 12 more than Dustin Johnson and Greg Norman.

Five days before Kim's birthday, Woods won his second US Open title at Bethpage and two months before that, he won The Masters at Augusta National for the third time.

Just three starts after joining the Tour as a Special Temporary Member in 2022, Kim won the Wyndham Championship and doubled his tally at TPC Summerlin in October.

He has certainly made a great start on the road to 82 wins, a record Woods holds along with the legendary Sam Snead. He currently shares the lead after the first round of the Hero World Challenge on 3-under.

Kim told Woods how disappointed he was that the 46-year-old couldn't compete this week after suffering another injury setback. He was also disappointed that he was beaten by Matt Fitzpatrick in front of Woods in the final of the Hero Shot challenge on Tuesday.

"We didn't talk about anything serious, it was just a lot of small talk. I told him we really would have loved it if he played this week and we're really going to miss him," Kim said on Thursday.

"He was like, he was really trying to prepare hard for it and unfortunately he couldn't make it. But it was really nice, it was the first time I officially got to meet him and talk to him a little bit. It was really cool, I have to kind of pinch myself a little bit.

"I kind of wanted to win it (Hero Shot). I thought it would be a great thing to win, and obviously Tiger being there. But hats off to Fitzy for making two holes-in-one and getting bummed out, but just hopefully I can play better in the tournament than in that Hero Shot."