Tiger Woods has confirmed he is not fit to play in the Hero World Challenge in the Bahamas this week after developing a common medical condition in his right foot. 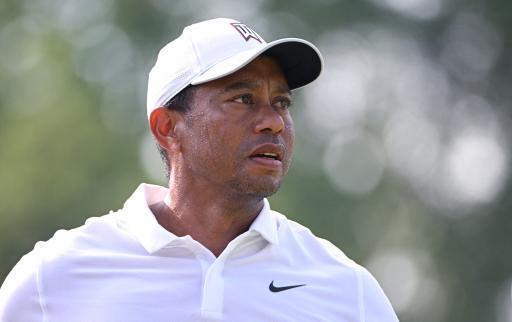 Tiger Woods has withdrawn from the Hero World Challenge in the Bahamas this week, a tournament hosted by the TGR Foundation, after developing plantar fasciitis.

Woods, 46, announced his withdrawal from the 20-man field held at Albany Golf Course earlier this evening. He still plans to play in The Match and the PNC Championship with his son Charlie Woods.

Plantar fasciitis is a common issue in the foot that can cause pain in the heel and the sole of the foot. Woods told his fans on social media that he pulled out after consulting his doctors and trainers.

It was only on November 9 that the 15-time major champion confirmed his participation for this week which appears on the PGA Tour schedule, but is classed as an unofficial event.

Woods suddenly had an incredibly busy December lined up. As previously stated, he still intends on playing in The Match with Rory McIlroy against Jordan Spieth and Justin Thomas at Pelican Golf Club on December 10.

The PNC Championship, in which he came second with his talented son Charlie in 2021, begins on December 15. The pair committed to the family-orientated competition on November 25.

"We have been looking forward to this week all year and we can’t wait to team up together for our third PNC Championship," Woods said.

Related Articles
LIV Golf's Phil Mickelson takes aim at PGA Tour: "I will never understand!"
Farmers Insurance Open: How much they are playing for

"This is such a special opportunity as a dad to get to compete with my son against so many golfing greats and their family members. It is going to be a very special week and I know that Charlie and I will have a blast."

Some of the world's best players such as Scottie Scheffler, Justin Thomas, Jon Rahm and Xander Schauffele will tee it up among other top players from the PGA Tour.

Viktor Hovland won the event in 2021. Woods has also won this event on five occasions, most recently in 2011 when it was called the Chevron World Challenge.

Woods managed to play four rounds at The Masters back in April, but he withdrew from the USPGA Championship to protect his injured right leg and he missed the cut at The 150th Open Championship in July.

Austria's Sepp Straka has been named as Woods' replacement in this week's field.