Xander Schauffele missed the green with his first two shots on the par-3 17th hole at Albany Golf Course, but the American still managed to make par... 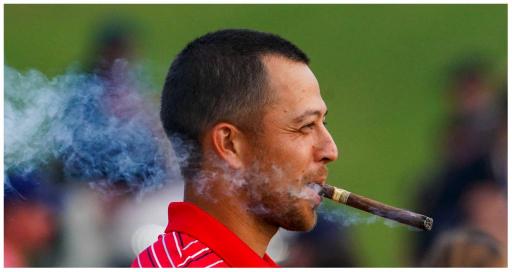 Xander Schauffele hasn't played on the PGA Tour since the ZOZO Championship in October, and you could probably tell with some of the scores he recorded in the first round of the Hero World Challenge.

He made a double-bogey on the 16th hole and bogeyed the final hole to card a level-par 70. But his most peculiar play came on the par-3 17th hole where his tee shot fell well short of the green.

His golf ball fell so far from the 169-yard hole that it plugged into the sand roughly 40 yards short of the green. Schauffele could only splash it out with still a sizeable chip to come.

With a small group of spectators standing by the green at Albany Golf Course, the seven-time PGA Tour winner played the most delightful chip which perfectly dropped into the cup.

He made an 'all-world' par of sorts without hitting the green. His level-par score proved useful as Tom Kim, Sepp Straka, Collin Morikawa and Viktor Hovland share the 18-hole lead on 3-under.

Schauffele, 29, has arguably had the best season of his career in 2022. He won the Zurich Classic of New Orleans alongside Patrick Cantlay and he also picked up trophies at the Travellers Championship and the Genesis Scottish Open.

Straka, who dropped an invite to J.T. Poston's wedding and a ticket to Georgia versus LSU to play in the event, replaced Tiger Woods in the field at short notice.

The Austrian was told by his agent on Monday that he had a place in the field after Woods withdrew following the latest injury setback to his right foot.

Hovland is the defending champion from 2021 and on the par-4 14th hole on Thursday, the young Norwegian almost holed his tee shot as his golf ball rolled inches by the cup.

The 25-year-old shot a 66 in the final round last year when Morikawa held a five-shot lead. Morikawa carded a 76 to give up the chance to become World No.1.

Jordan Spieth struggled to a score of 4-over which puts him at the bottom of the 20-man field in the Bahamas. Despite his heroics in the Hero Shot challenge, Matt Fitzpatrick carded a 2-over 74.