Tiger Woods played off an awkward attempt at a fist bump during his appearance in the commentary booth at the Hero World Challenge. 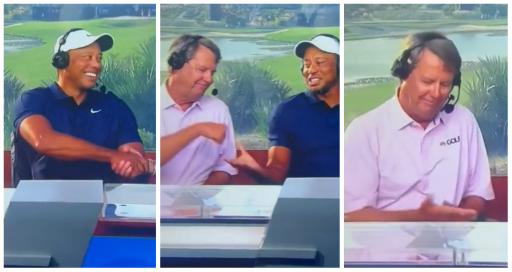 Tiger Woods joined the broadcast during the first round of the Hero World Challenge as part of his hosting duties.

The 15-time major champion spoke on a range of subjects as he confirmed retirement is on the mind after developing plantar fasciitis.

Woods once again lavished praise on Rory McIlroy, claimed Xander Schauffele is the best player yet to win a major and the future of the PGA Tour.

He also spoke about his son Charlie Woods and how he's employing the same mind games his father Earl bestowed upon him when he was younger.

Related: Xander's up-and-down at Hero needs to be seen to be believed

The 46-year-old claimed what he was trying to do in the face of the threat of LIV Golf was leave the tour in better shape than when he arrived.

There was also this awkward moment before he departed the booth. You can see below just how Woods superbly played off the awkward moment.

Earlier in the week Woods met with reporters where he said the goal going forward is to play all four major championships in 2023 and maybe one or two more.

He said he didn't know how much he had left in his right leg, which is held together by screws following his car crash.

"I like playing, I like competing, but unfortunately — I can hit the golf ball and hit whatever shot you want — I just can't walk."

Woods also addressed the future of the PGA Tour. He met with McIlroy via zoom and all 20 players in the field before the tournament began to discuss LIV Golf.

The 82-time PGA Tour cited Greg Norman's vendetta against the American circuit as being a stumbling block to navigating a path forward.

"They're suing us first and we countersued them, so they have to back off the table, they will back off the table and then we'll have a place to talk. But their leadership has to change as well. If that doesn't, then I think it's going to continue to go down the path that it's going right now.

He also claimed the OWGR ranking system is flawed.