Bryson DeChambeau has alluded to having a relationship on various podcasts in the past, but now it seems he has a new girlfriend who loves golf. 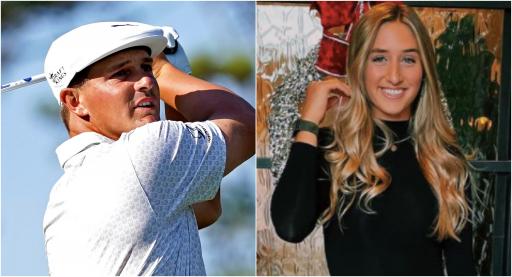 During the last year or so on the PGA Tour, it seems that Bryson DeChambeau has been flying solo without a girlfriend or a recognised partner.

There has been speculation on DeChambeau's relationship status in recent years and he has spoken about it on different podcasts such as the Rick Shiels Golf Show and Full Send Podcast.

However, it now seems like the 28-year-old is in a happy relationship with fellow golfer Hunter Nugent who currently plays for the women's golf team at San Antonio.

On her Instagram page, Hunter has posted a lot of images of her playing at different tournaments while representing the University of Texas.

Hunter, who is from Ontario, is in her junior year at university and before going there, she attended Blyth Academy. She played four tournaments over the Autumn of 2021 and she had the best scoring average at UTSA of 72.8.

It sounds like the 21-year-old is on course for a great career in golf which is certainly something that the pair have in common.

The biggest clue that they were together was revealed when DeChambeau shared her Instagram story on his own account on Valentine's Day.

Let's hope that the former US Open champion's relationship leads to happiness on the golf course, as recently, all he has experienced is physical pain.

DeChambeau has officially withdrawn from the Arnold Palmer Invitational after his wrist and hip injuries forced him to make a difficult decision.

He won the tournament at Bay Hill last year and it is a shame that we won't see another monster drive on the par-5 6th hole in 2022.

Next Page: Will Dustin Johnson be World No.1 again or is his time spent?