Tiger Woods returns to competition this week, but before the PNC Championship!

Tiger Woods is set to take part in the PNC Championship Pro-Am on Friday with Matt Kuchar. 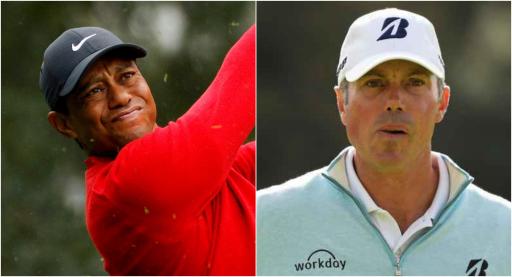 Tiger Woods is set to ramp up his comeback to competitive golf by competing in the Pro-Am on Friday at the PNC Championship.

At the event held in Florida, there is also a Pro-Am on Thursday as well as the two competition days on Saturday and Sunday. His son Charlie is reportedly not playing in the Pro-Am.

After much speculation, Woods confirmed last week that he and Charlie would be playing in the special family event which they also played in last December.

RELATED: JUSTIN THOMAS AND SMYLIE KAUFMAN TROLLED BY THE PGA TOUR ON TWITTER!

There were reports that the PNC Championship were keeping a spot open for the Woods duo in the hope that they would confirm their participation.

#NEW: Tiger set to play the Friday morning pro am at 9 AM ET alongside Matt Kuchar. Charlie won’t play pro-am. Also to note; Tiger not listed for Thursday’s pro am, not a huge surprise that he’ll only play one of the two. Media availability for TW is Friday following the pro am

Justin Thomas and his father Mike are the current reigning champions of the 36-hole event and they played in the same group as Tiger and Charlie last year.

TWLegion posted this newest development on Twitter yesterday afternoon. This update caused a lot of excitement amongst golf fans who want to see the 15-time major champion back.

After the Pro-Am on Friday, Woods is set to speak to the media too where we will inevitably receive further news on his current physical state.

At the Hero World Challenge in the Bahamas, which was won by Viktor Hovland, Woods admitted that a full-time PGA Tour career was now an impossibility.

Fleeting appearances at tournaments such as the PNC Championship may be the only events that he is capable of playing in, despite expressing his desire to play at the 150th Open in 2022.