Tom Hoge emerged as the unlikely winner at the AT&T Pebble Beach Pro-Am with a gutsy Sunday performance. 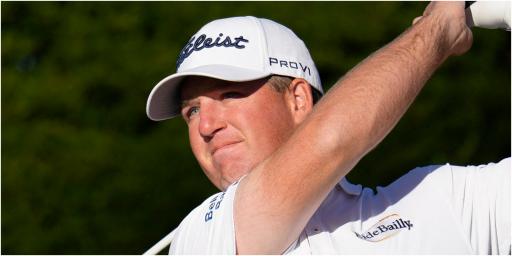 Hoge entered the final day in a three-way tie for the lead and in the end his round of 4-under 68 was enough to claim the narrow win.

This was his first ever PGA Tour victory at the age of 32 for the North Carolina native, who picked up $1.6million for his exploits.

His last professional win came in 2011 on the Canadian Tour. This one will have felt a little bit different, though.

His last 18 holes saw him pencil seven birdies, a bogey and a double bogey at the par-3 fifth.

Beau Hossler, searching for his first victory, needed an eagle at the 18th to force a playoff. He sent his second shot right into the bunker.

Jordan Spieth began his last 18 holes lurking alongside Patrick Cantlay and put on a clinic with his irons. It looked like it was his to lose.

He was the experienced man in the field with multiple PGA Tour wins and major titles. That meant surely he was the man to beat?

But a gut-wrenching bogey at the par-3 17th put an end to his chances. Hoge made birdie at the same hole to provide a cushion.

"I felt a little off with the driver," Spieth admitted. "It was just little things here and there. I don't think I need to change anything."

Cantlay, who admitted he had a love affair with Pebble Beach earlier this week, seemingly could not buy a putt as his challenge faded.

Across the globe, the majority of the world's top 50 had gathered for the Saudi International having shunned Pebble Beach.

Lucrative offers were said to have exchanged hands before privately chartered jets picked up their players.

We would have expected perhaps Dustin Johnson or even Bryson DeChambeau to depart the Kingdom even richer than they had arrived.

But in the end the unlikely Harold Varner III picked up his first victory - a landmark win - in five years.

At least that provided one feel good moment for a tournament that has been mired with controversy.

His winning 92-foot eagle putt sloped severely. In fact it was so treacherous he could have put it in a lake. Yet the weight was perfect.

But Hoge's final putt, of approximately three feet for par was a little bit different. And it was actually worth more than Varner III's cheque.

Spieth scintillated the golf world with his fine 63 on Saturday which included the most heart-in-mouth shot we've ever seen him hit.

He spent the previous week battling an infection but had the stomach to stand inches from a 70-foot drop and play his shot. He saved par.

Spieth made the turn at 2-under par while Cantlay did exactly the same but it was Spieth who forged his way in front.

There was trouble at times for Spieth. Of course there was. That included a wayward tee shot at 14 that leaked way, way right.

From there, he needed to fade the ball round a tree to reach the green. His ball hit a branch but he scrambled beautifully for par.

At the par-3 17th, Spieth flushed his iron shot but it landed one yard short from its intended target and found the sand.

"It's the exact shot I wanted to hit," Spieth groaned, who executed the routine bunker shot and left five feet for par. He missed it high.

It's no surprise Spieth has performed well this week. He's won here before in 2017 and grabbed four other top-10 finishes.

That also included a squandered 54-hole lead for the 28-year-old, who enjoyed a career resurgence in 2021 with a win in Texas.

He'll look back on this week on what could have been. He needed an eagle up 18 but nearly topped it. That was that for Spieth.

A first victory as a father beckons. Surely he should be mentioned in the mix for another green jacket?

But this was Hoge's day.