Brandel Chamblee launched an extraordinary broadside on Phil Mickelson after he accused the PGA Tour of being greedy. 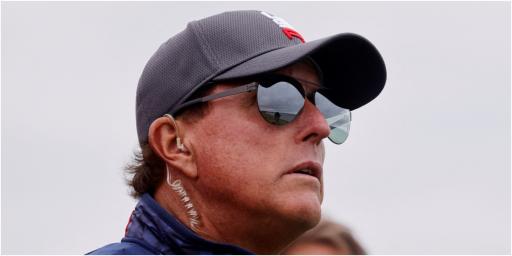 First it was Brooks Koepka who raised eyebrows in the wake of Phil Mickelson's comments about the PGA Tour and greed.

Now it's Brandel Chamblee, the analyst who works for the Golf Channel who has taken a dig at Lefty. Chamblee, 59, certainly took no prisoners with this piece.

Writing for the Golf Channel, Chamblee accused Mickelson of subterfuge and of being a "highly paid ventriloquist puppet".

Mickelson spoke at length to Golf Digest earlier this week from Saudi Arabia ahead of the Saudi International and was highly critical of the PGA Tour's distribution of wealth and took issue with how his media rights are handled.

It has led for Mickelson, 51, to "look for opportunities elsewhere". One of those opportunities is of course Greg Norman's Saudi-funded venture and a potential super league with the game's biggest stars such as Bryson DeChambeau and Dustin Johnson.

Chamblee wrote that Mickelson is a "highly paid ventriloquist puppet involved in a sportswashing operation for a murderous regime guilty of human rights atrocities."

Chamblee claimed he would re-name the Player Impact Program - which Mickelson won the top cash prize of $8 million in 2021 - as the Player Irony Program.

"Finally, it was not obnoxious greed by the PGA Tour that opened the door, to use Mickelson’s phrase, for a potential Saudi-backed rival league.

"It was the never-ending stream of human atrocities, such as the butchering and dismembering of journalist Jamal Khashoggi, of which the Saudi’s Public Investment Fund, which sponsors this week’s Saudi International event, has been accused of abetting.

"Horrors such as that are hard to hide and impossible to ignore, which compelled the Saudis to engage in the calculated deception commonly known as sportswashing.

"Athletes are invited (and paid lavish sums) to costume their participation in a sport, hoping the fig leaf will belie the contempt the hosting country has for the intelligence of their customers and the civil rights of their citizens."

Chamblee also wrote of Mickelson's escape from an insider trading scandal where Mickelson was named as a relief defendant in a civil case.

That was in relation to Mickelson buying stock between July and August 2012 where Lefty bought Dean Foods stock worth $2.4million.

A day after he purchased the stock, the brand announced a spin-off which resulted in Mickelson profiting nearly $1 million after the price soared.

Mickelson ended up having to give back his profits.