Bill Murray is a familiar sight at the AT&T Pebble Beach Pro-Am but his antics are certainly rubbing some people the wrong way. 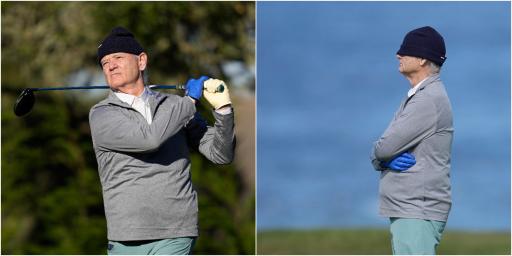 Bill Murray is such a familiar face at Pebble Beach these days, but he certainly appears to have divided opinion.

Murray is now 71 years old and it's hard to believe he's been gracing us with his presence at the AT&T Pro-Am since 1993.

He is known for the fact he always wears two gloves, bucket hats, crowd engagement and his personality which always draws laughter.

This year was no different and Murray even gave us a no-look putt from about seven feet which he tapped in using one hand.

He also showed us some club throws in pretend fits of anger and led us all on a chorus of happy birthday.

Mark Calcavecchia took to Twitter to let his feelings be known about the actor who never shies away from the spotlight on the fairways.

I think Bill Murray is an amazing actor. Huge fan of a lot of his movies. But this golf course act is getting SOOOO tired.

"I think Bill Murray is an amazing actor," the 13-time PGA Tour winner and former Open champion wrote to his 15,000 followers.

"Huge fan of a lot of his movies. But this golf course act is getting so tired," added the 61-year-old.

Calcavecchia now plays on PGA Tour Champions but his biggest victory came at the 1989 Open Championship at Royal Troon.

Is there a ring of truth about what Calcavecchia has to say? His comments certainly appeared to divide opinion.

Murray is not the only person who is a regular face at the storied venue who we know will always give us what we expect.

Alfonso Ribeiro, best known for playing Carlton Banks in The Fresh Prince of Bel Air with Will Smith also gave us his traditional dance.

Ribeiro, 50, entertained the crowds throwing his arms side-to-side just as he did to the Tom Jones tune 'It's Not Unusual' in the sitcom.

Maybe the problem is the lack of other genuine celebrities leaving a disproportionate amount of focus on the Bill show .. he works hard and gives alot to the spectators .. the bigger issue is the mundanity and array of anonymous ams around him IMO .. not to mention the pro field

Agreed. Nobody is interested in watching noname wealthy corporate types golf - the big attraction (besides the iconic golf course) in the old days was watching real celebrities golf. I believe the tournament needs to go back to that format.

Without Tiger... Watching anyone golf is not very exciting... But just an FYI Bill's been way more important to the world than yourself my friend... Some prospective

I’m sick of his disrespectful antics. One of the world’s best courses and throw the putter without looking. Yes, I get it’s some sort of “thing” of his…..but that can tear up some turf with the little attention he’s paying around the greens.

Same celebs. Boring to watch. One might say not unlike champions tour

The criticism isn’t of Bill, it’s of the incessant coverage of Bill by CBS.
Bill is great, I can dial up Bill in everything he’s ever acted in in 3 swipes of my remote.
I tune in to golf to see PGA players play competitive golf at the highest level.
This coverage ain’t that.