Tom Hoge: What's in the bag of the maiden PGA Tour winner?

Tom Hoge shot a 4-under-par 68 in the final round to win the AT&T Pebble Beach Pro-Am, finishing two shots ahead of Jordan Spieth. 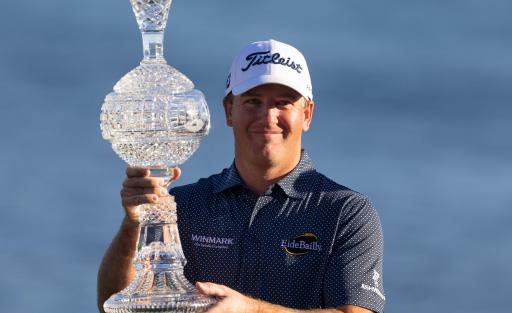 Tom Hoge has become the latest first-time winner on the PGA Tour after outscoring Jordan Spieth on Sunday at the AT&T Pebble Beach Pro-Am.

Hoge entered the final round with a share of the lead but he made a poor start with a double-bogey at the 5th hole and a bogey at the 8th hole.

Spieth took the lead late in the day after a solid front nine of 2-under-par. He reached 18-under-par with birdies on the 12th and 13th holes to take control of the tournament that he won in 2017.

However, Hoge made four birdies on the back nine to surge clear, while Spieth made a critical bogey on the 17th hole. The 32-year-old shot a 68 and won by two shots.

Beau Hossler had an outside chance to force a playoff on the 18th hole, but when looking for an eagle, he found the bunker. He finished in outright third, one shot ahead of the FedEx Cup champion Patrick Cantlay.

"I've certainly made enough mistakes to figure out how to not do that anymore," Hoge said after his final round.

"So it's been a nice progression and I think just being comfortable in this atmosphere now, certainly helped to be in the final group a couple of weeks ago in Palm Springs so I really felt good today right from the get-go.

"You never know where that slight edge is going to come, so we hope that you know that you get enough and it will all add up."