Jordan Spieth has explained in further detail how his family talk went after he played a simply ridiculous shot at Pebble Beach. 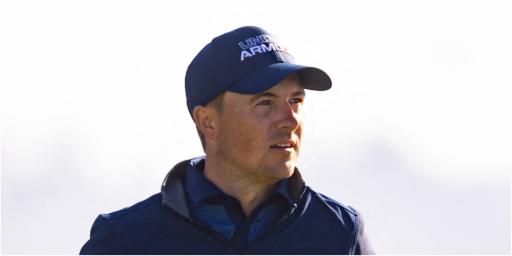 Jordan Spieth has gone into further detail about how the conversation with his family went over his "life or death" moment.

Speaking to the media after surrendering his lead down the stretch at the AT&T Pebble Beach Pro-Am, Spieth was trying to take the positives.

Spieth's chances to win his 16th PGA Tour title came crashing down when he made a gut-wrenching bogey at the par-3 17th hole.

A peculiar thing about this game is even if you hit the ball well it still goes wrong. His tee shot was the best swing of the week. He flushed it.

The ball landed only a yard from its intended landing zone and the 28-year-old couldn't scramble from the bunker to save par, missing his putt high.

Playing with the leaders a hole behind, Tom Hoge made birdie where Spieth couldn't and ultimately claimed his maiden PGA Tour title by a margin of two strokes.

Spieth told how he will "kick himself" looking back on the week but that he was pleased his fellow Texan, from Fort Worth, snatched the win.

The memorable moment of the week came in the form of Spieth taking on a simply ridiculous shot on the edge of a cliff at the eighth hole.

Facing a near 70ft drop, Spieth took the shot on. A camera attached to a blimp captured the entire exchange. It was heart-in-mouth stuff.

Seeing those images unnerved Spieth, who was not too happy with how he would have to explain the shot to his parents and wife Annie.

Asked about how that talk went after he played that shot in his third round, where he shot a sublime 9-under 63, Spieth said:

"They were just asking questions about it because it was maybe hard to tell how stable it was. And they didn't like what I had to say, I don't think, but like I was just saying I think it was more of a relief feeling and I was asking where they were and they were like my mom and Annie couldn't watch and my dad was just like, what's going on."

"So it was, yeah, I think looking back I just never had a situation where it was like a life and death scenario on the golf course, so I think it was just kind of weird in that setting. But I don't expect to have anymore of those any time soon."