Tom Kim may be playing at the Hero World Challenge hosted by Tiger Woods, but he still has one eye on the FIFA World Cup and he was delighted with South Korea's progression to the last 16. 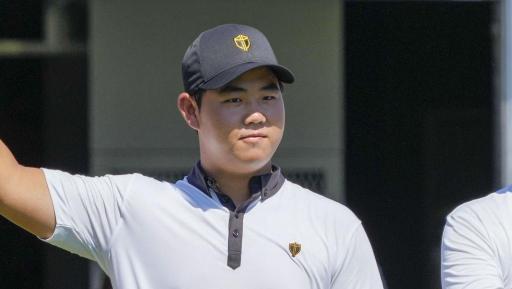 Ahead of the knockout round of the FIFA World Cup, there have been so many shocks and surprises with the likes of Germany and Uruguay failing to qualify for the last 16.

One of the teams that progressed to the next stage was South Korea. Hwang Hee-Chan scored a winner in stoppage time against Portugal in their final group game which took them through at the expense of Uruguay.

South Korea will now face the might of Brazil for a place in the quarter-finals. One man who was delighted with this result was none other than PGA Tour star Tom Kim.

Just before he spoke to the media after the second round of the Hero World Challenge, Kim found out the result of the crunch match in Group H and couldn't contain his excitement.

"How did that happen? Oh my god! We beat Portugal? Goosebumps. Literally goosebumps. Wow, that's amazing - That news was probably way better than my golf." Kim said.

Kim is not the only one playing in the limited-field event at Albany to be keeping track of the World Cup. During Monday's practice session, Jordan Spieth joked with a young fan that they shouldn't like each other during the group stage.

Max Homa also jokingly apologised for describing the result of England and USA's match in Group B as a 'tie' as opposed to a draw, signalling the difference in football terminology between American and English people.

As much as the World Cup in Qatar is a huge event, Kim still has much to play for this weekend. He has so far carded scores of 69 and 72 to sit two shots behind defending champion Viktor Hovland.

The 20-year-old is one of the most exciting prospects in the world of golf. In 2022, he has won the Wyndham Championship and the Shriners Children's Open, as well as earning two points for the International team at the Presidents Cup.