Tiger Woods was in the commentary booth during the third round of the Hero World Challenge as he watched Viktor Hovland take a three-shot lead. 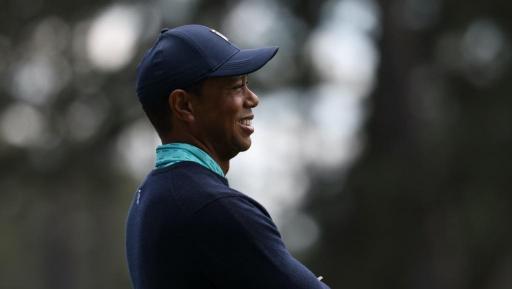 Tiger Woods revealed he wants "another big win" on the PGA Tour during his stint in the NBC commentary booth at the Hero World Challenge on Saturday - and he isn't ruling out a major.

While talking in the studio during the third round, Woods said he believed he could compete with the best young players in the game but admitted he must "get his walking figured out" - as reported by TWLegion.

The 46-year-old produced one of the most poignant images in the game of recent years when he became emotional following his ovation from the St Andrews crowd at The Open Championship in July.

ALERT: Tiger says he not only wants another PGA TOUR win, he wants “another big one too”. Tiger says he still believes he has the game to take on todays top talent and needs to get his walking figured out.

Woods said participation at The 150th Open was a key target. Unfortunately, the three-time champion golfer of the year missed the cut in what was his most recent competitive appearance.

The American had to withdraw from this week's event in the Bahamas after developing plantar fasciitis in his right foot. He still intends on playing in The Match on December 10 and the PNC Championship which begins on December 15.

He plans on partnering with his son Charlie at the family event in Orlando. The Woods duo came second last year behind John Daly and his son, so he will be hoping to be fully fit for another tilt at the title.

Viktor Hovland is on fire with his TENTH birdie of the day pic.twitter.com/jUPlOcvGuK

As for the tournament at Albany Golf Club, Viktor Hovland carded a superb 8-under 64 earlier, the lowest round of the day, to reach 13-under and three shots ahead of World No.2 Scottie Scheffler.

Hovland, the defending champion from 2021, made 10 birdies and two bogeys on Saturday. Just as he did 12 months ago to Collin Morikawa, Hovland could be about to prevent another American to reach World No.1.

Scheffler could reach the summit of the rankings with a win this week. The 26-year-old carded a round of 6-under to reach 10-under for the week and after yesterday's round, he told the media he doesn't like finishing second.

"I played good today. Yeah, I played really solid, kept the ball in front of me, hit a lot of fairways. Felt like I did a good job just keeping the course in front of me and giving myself some changes," Scheffler said after the third round.

Justin Thomas also shot a 66 which helped him to reach 8-under next to his Presidents Cup teammate Cameron Young. Morikawa and Xander Schauffele are a shot further back on 7-under.

"I just feel like I played solid. It was a bit of a crapshoot with the mud on the ball, so you just kind of had to really pick your spots a little bit," Thomas said.

"I had a couple times where you have scoring clubs in your hand but just given the situation and the amount of wind and what would happen, you just kind of had to make the most of it.

"I felt like, same as yesterday, I was very patient, very focused and I just kind of plodded my way around. Definitely left some out there, but obviously very pleased with 6-under."