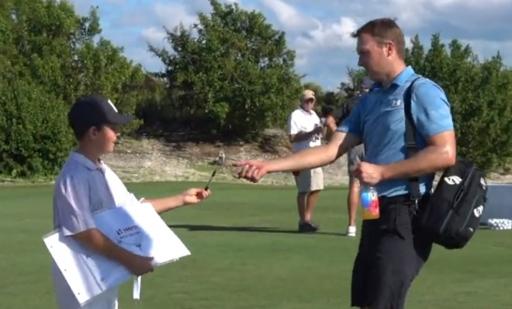 Jordan Spieth is always great with his golf fans and the story was no different during his Monday practice session ahead of Tiger Woods' Hero World Challenge at Albany in the Bahamas.

Spieth walked over to a young golf fan who wanted his autograph, and he duly obliged like he always does.

Once Spieth, a fanatical United States football fan, found out the nationality of the youngster, he then started some World Cup trash talk.

"So we don't like each other until we get out of the group stage right?!" joked Spieth, who then continued the interaction with the youngster in a brilliant little clip ahead of the 20-man unofficial PGA Tour event.

To add context to the above clip, England currently top Group B ahead of the final round of group matches that take place on Tuesday evening.

England have 4 points after two games following a 0-0 draw with USA last week.

Iran have 3 points, USA have 2 points and Wales have 1 point.

USA need to beat Iran tonight in order to progress to the knockout stages, while England will guarantee top spot in the group with a victory over Wales.

England just need to avoid a 4-0 defeat to Wales in order to progress to the next round.

Tiger Woods sadly confirmed he will not be taking part in his annual Hero World Challenge this week following further injury to his foot.

He will be on site though to help with the running of the tournament and to present the trophy on Sunday evening.

Jon Rahm, who recently won a third DP World Tour Championship title in Dubai, is the tournament favourite in a star-studded field that also includes the likes of Spieth, Scottie Scheffler, Justin Thomas and Tony Finau.

Woods is hoping to be fit to join Rory McIlroy in their upcoming Match against Spieth and Thomas on December 10.

He is also scheduled to play alongside his son Charlie Woods in the father-son PNC Championship from December 17 to 18.

Next Page: Cameron Smith on missing out on becoming World No.1 - "It's a bit of a pain in the bum"