Tiger Woods: How good is Charlie at golf and what is his current handicap?

The big cat and little cat will play at the PNC Championship next week. 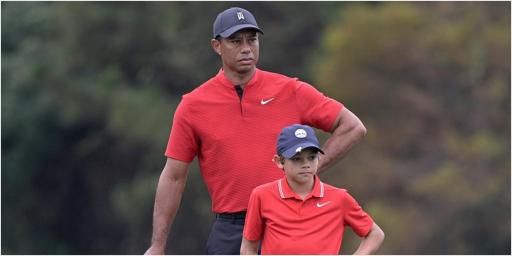 Charlie Woods will play alongside his father Tiger Woods for the second straight year at the PNC Championship next week.

As you can no doubt imagine, Charlie is an avid golfer and takes after his father in many ways.

When we first saw him hit some balls at the PNC Championship last year, he displayed all the mannerisms of his dad.

What was interesting is that in some respects Charlie wasn't even aware of it.

When he ripped a fairway wood and set up an eagle putt (he drained it) he took two steps, paused and then carried on. Tiger did exactly the same.

Of course, we had the club twirling and fist-pumping too. Better than most.

How good is Charlie Woods at golf and what is his handicap?

There is no doubting that Charlie has a very good golf swing for someone of his age.

With the tutelage of his father and the help of Justin Thomas's father Mike Thomas, it's unlikely to get worse.

Afterall, his father won his first major at the age of 21 years, three months and 14 days when he took down the 1997 Masters.

Charlie's handicap is unknown, but it is widely thought to be around the scratch mark.

He has a good record in junior tournaments, shooting regularly under par in nine hole events.

At the US Kids Golf sanctioned event at Hammock Creek Golf Club, he shot 3-under to win and obliterated the field.

Charlie will no doubt have to grow up with intense media attention if he wants to pursue a career in golf.

With what he has at his disposal, who would be against him getting to the PGA Tour?

There are worse bets out there than Charlie winning at a major at 1500/1.