Fan-favourite Tony Finau has withdrawn from the Shriners Hospitals for Children Open after testing positive for COVID-19. 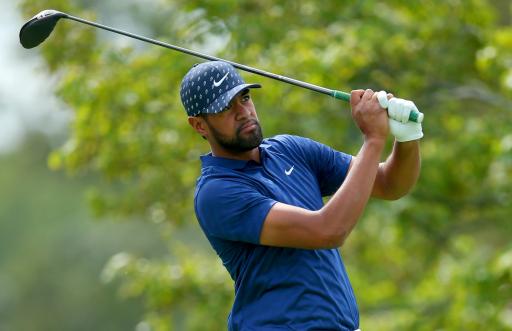 The Shriners Hospitals for Children Open has been hit with a huge blow after fan-favourite Tony Finau was forced to withdraw from this week's PGA Tour event after testing positive for the coronavirus.

Finau was set to play at TPC Summerlin in Las Vegas this week as the fifth best ranked player in the field, behind PGA Championship winner Collin Morikawa (5), US Open champion Bryson DeChambeau (6), Webb Simpson (7) and Patrick Cantlay (13).

The World No.16 took to Twitter to announce his positive coronavirus test.

"Earlier today, I received a positive result for Covid-19 under PGA TOUR on-site testing protocols and have begun a period of self-quarantine to protect others around me," said Finau. "I am feeling well, and am otherwise in good spirits.

"I look forward to returning to action as soon as I am able, and I wish everyone at the Shriners Hospitals for Children Open a great week ahead!"

I look forward to returning to action as soon as I am able, and I wish everyone at the Shriners Hospitals for Children Open a great week ahead!

Finau still only has one PGA Tour victory to his name, but is one of the most consistent players in the world and the 31-year-old will be hopeful of adding more wins this season.

At the US Open last month, Finau looked as though he had a fantastic chance of winning, but a lacklustre weekend saw him drop to T8 at Winged Foot, with DeChambeau claiming his maiden major.

Finau has been dealing with some problems in his personal life, after a former business associate filed a lawsuit of $16 million, claiming that Finau owes money for expenses over several years.

RELATED: Tony Finau is being SUED for $16 MILLION!

Such expenses, according to a report in the Deseret News, included golf lessons, travel, insurance and the family's mortgage payments.