How has this man only won twice? 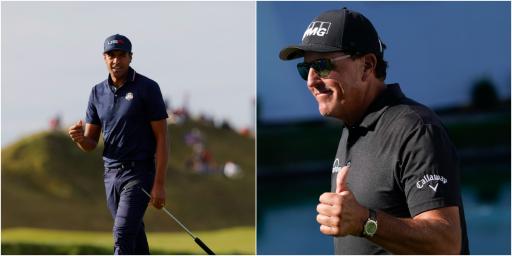 Oh my. What a round.

These were the words Phil Mickelson chose to use to react to his pal Tony Finau shooting a 59 at Silverleaf Golf Club.

That's right. 59. Not bad, eh? Okay, it wasn't in an official event, but it's still damn impressive.

Finau, 32, was playing alongside Jon Rahm - who sat out the DP World Tour Championship - in Arizona.

He made five birdies on the front nine to make the turn in 31. Then he duly followed it up with eight birdies in a row from the 11th.

That's 28 strokes for his back nine. 13 birdies overall. And this guy has only won twice on tour? Incredible.

Phil Mickelson reacted accordingly to the post from @BoydSummerhaysGolf with: "Oh my. What a round."

What's interesting is that this was not a course record. It's actually a tie. Finau matched Rahm's 59 which he also shot there.

The pair posed alongside Finau's scorecard.

The only thing that strikes us as a little bit odd is the commentary. It's a tad underwhelming? The dude has just shot 59.

Let's amp it up a little?

Finau has previously broken the 60 barrier.

He shared the news that he did so at his home course at Victory Ranch in July 2020.

My 2nd ever sub 60 round today at @VictoryRanchUT
59!! 3 shots better than my course record of 62 pic.twitter.com/Wblv7ysykY