It's no secret the 31-year-old is a long-time admirer of the brand... 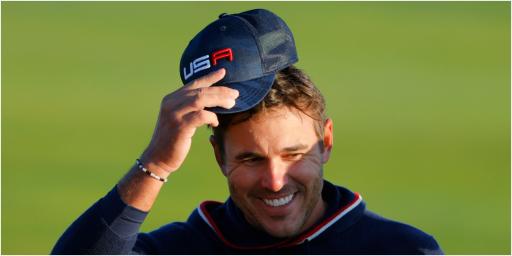 Srixon's stock is about to fly.

That's if the news that Brooks Koepka has signed an equipment deal with them are true.

And it looks like it just could be the 31-year-old four-time major champion featured in a teaser video released by the brand.

It's no secret Koepka has been a long-time admirer of the Srixon. He currently uses the ZX7 irons.

He's been a free agent for a while now, but that could be set to change.

MORE: TAYLOR GOOCH ON THE BRINK

The figure is shown with an interlocking grip, with some huge arms. Sound like anyone familiar?

An eagle-eyed viewer also noticed the wristband the player is seen using to peg up a ball is the same won Koepka has previously worn.

We expected this at the end of last season.

In January Koepka was was revealed to be using Srixon clubs.

The American has previously used Mizuno irons - which he won all of his major championships with - which saw him move to become the World No. 1 for the first time in his career.

The deal that is expected to be announced would see Koepka using the Z-Star XV ball, ZX7 irons and Cleveland Zip Core Wedges.

In the bag this season he used his trusty Nike Vapor Pro 3-iron and a TaylorMade M5 driver.