Social media reacts to Tony Finau's golf ball eventually being holed after spending 10 seconds on the edge of the cup... 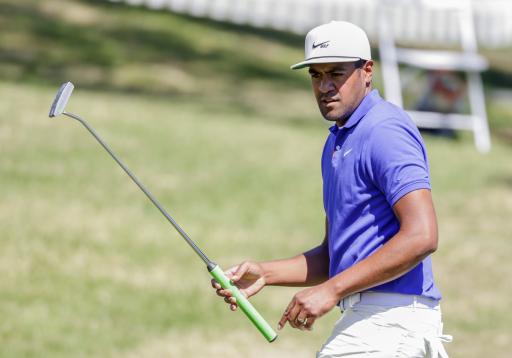 Tony Finau used the golf rules to his advantage on day three of the WGC Match Play at Austin Country Club as he waited a "reasonable time" for his ball to eventually fall into the cup.

Despite already being out of the tournament having only taken half a point in his opening two matches, Finau had to play out proceedings by taking on US compatriot Jason Kokrak on Friday afternoon.

The big talking point on social media arose as early as the first hole when Finau sent his seven-foot birdie putt from left to right onto the back edge of the cup where it would remain for a good 10 seconds.

Finau could not believe his ball had not fallen into the cup, and neither could the PGA Tour Live commentary team.

The World No.13 then took a slow walk up to the cup while still in disbelief, and as one of the commentators encouraged the American to put his shadow over the hole, incredibly the ball fell into the cup for a birdie to move Finau 1 up in his match.

Despite a number of comments on social media claiming Finau had taken "too long", and that it was also "his footsteps around the cup that made the ball go down", Finau was considered to have been well within his rights to take "reasonable time" under Rule 13.3 to approach his ball.

Some golf fans questioned Finau should not have even put his shadow over the ball. What do you make of the incident?

WATCH what happened in the video below:

"Put your shadow on it!"@TonyFinauGolf starts the day 1UP with a little help from his ... shadow? #QuickHits pic.twitter.com/wWJK7HDdEj

Isn’t that illegal? He had an effect on the ball at rest after making a stroke? So shouldn’t there be a one stroke penalty and the ball to be replaced?

no dude. just no. its because the grass wilts ever so slightly when the sun stops shining on it.

because pga-tier greens are mowed so tight and roll so fast, a ball right on the cusp of the cup can actually be impacted by the subtle aforementioned wilting.

this is an old trick.

Yeah, shadow, nothing to do with him tap dancing near the ball

Finau went on to win the match 2 up against Kokrak, however, South Africa's Dylan Frittelli was the only man in Group 12 to come away with 2 points and so he progressed to the knockout stages over the weekend.

Here's more about the rule in question...

If any part of a player’s ball overhangs the lip of the hole:

If a ball overhanging the hole is lifted or moved before the waiting time under Rule 13.3a has ended, the ball is treated as having come to rest:

> The ball must be replaced on the lip of the hole (see Rule 14.2), and the waiting time under Rule 13.3a no longer applies to the ball (see Rule 9.3 for what to do if the replaced ball is then moved by natural forces).

RELATED: DID YOU KNOW ABOUT THIS REPAIR OF DAMAGE RULE?

If the opponent in match play or another player in stroke play deliberately lifts or moves the player’s ball overhanging the hole before the waiting time has ended:

> In match play, the player’s ball is treated as holed with the previous stroke, and there is no penalty to the opponent under Rule 11.2b.
> In stroke play, the player who lifted or moved the ball gets the general penalty (two penalty strokes). The ball must be replaced on the lip of the hole (see Rule 14.2).

Need more help with the rules of golf? Please visit the R&A website.