Four players are tied at the top of the leader board after 54 holes at the Valero Texas Open on the PGA Tour. 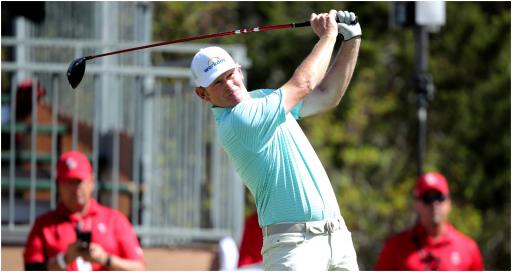 Four players are tied at the top of the leader board after moving day at the Valero Texas Open on the PGA Tour.

More: What they are playing for at The Valero Texas Open

Brandt Snedeker, Dylan Frittelli, Beau Hossler and J.J. Spaun have all moved to 10-under after 54 holes at TPC San Antonio.

Snedeker fired a third round bogey free 67 after shooting 73-66 at the Oaks Course.

He said: "It was pretty simple out there for me today. I hit it pretty good, drove the ball fantastic and hit a bunch of good iron shots. I'm going to go work on my putting here a little bit, make sure it's ready to go.

"Missed a few short ones that I don't want to do tomorrow, but all in all I feel really good about where my game is and excited about the challenge tomorrow's going to create."

Matt Kuchar is two strokes behind the leaders and is also chasing that Masters berth in his 500th career start on the PGA Tour.

England's Richard Bland found himself four strokes behind the pace after three rounds on his PGA Tour debut.

Bland, 49, could have claimed a spot at Augusta National at the WGC Match Play had he beaten former World No. 1 Dustin Johnson.

But he missed out and needs a win if he is to play in the first major of the year in Georgia.

Defending champion Jordan Spieth was level par after 54 holes in a tie for 63rd.

Next page: Tiger Woods to arrive at Augusta National on Sunday afternoon, per report