Rory McIlroy and Bryson DeChambeau missed the cut on the PGA Tour at the Valero Texas Open a week before The Masters. 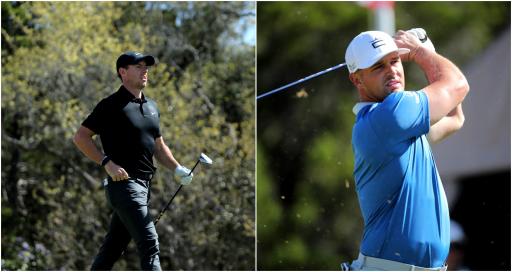 Rory McIlroy and Bryson DeChambeau were two big names to miss the cut at the Valero Texas Open on the PGA Tour.

A week before the first major of the year DeChambeau and McIlroy had to bow out after missing the 1-under cut line at TPC San Antonio.

McIlroy, 32, is searching for the career Grand Slam but will miss out on two more rounds of competitive action after going 72-73 to finish 1-over.

DeChambeau opened up his week with a 1-over par 73 and followed that up with a 4-over par 76.

The 28-year-old American is still working his way up to full fitness after missing out a large chunk of the PGA Tour season thus far.

He had been affected by wrist and hip injuries that forced him out of several events. He did play last week's WGC Match Play.

Over two days' play, his rounds were wildly entertaining. In round one he made six bogeys, three birdies and an eagle.

Round two saw him sign for an ugly triple bogey at the par-4 first, a double bogey, two bogeys and three birdies.

Defending champion Jordan Spieth had looked in okay form until he carded a disgusting three putt from all of three feet.

Spieth said: "I had some bad putts yesterday and still did today on a couple holes, but it was definitely a lot better and I think it will progress this weekend."

Defending Masters champion Hideki Matsuyama was forced to withdraw with a neck injury, casting doubt on his Augusta defence.

Ryan Palmer held the 36-hole lead by a margin of two strokes over Kevin Chappell, Matt Kuchar and Dylan Fritelli who are all on 8-under.

How did Palmer feel?

"Awesome," he said. "Bogey-free on this golf course is good any day, but when you throw in the winds we had, it makes it that much more special.

"I'm excited the way I'm driving the ball again. I spent the last month and a half really struggling and my results have kind of shown.

"I'm able to take the left side of the golf course out of play now and I brought it here this week and it's showing.