Viktor Hovland shot a career-low score of 62 in round three to take a two-shot lead at the World Wide Technology Championship. 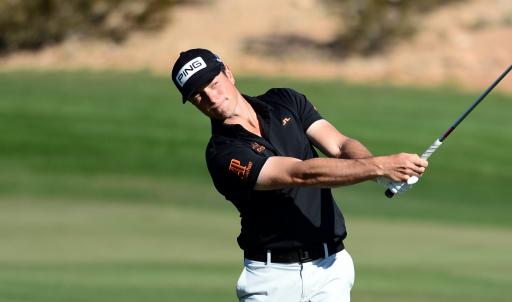 Viktor Hovland "could've shot a 59" in the third round of the World Wide Technology Championship according to one of his playing partners.

Anirban Lahiri, who shot a 1-under-par 70 of his own on Saturday, said that Hovland could've joined the exclusive PGA Tour club if a few more putts dropped at El Camaleon Golf Club.

Nonetheless, the young Norwegian shot a career-low score of 62 to reach 19-under-par which is two shots ahead of American Talor Gooch.

Before the tournament, Hovland's driver was accidentally broken by Danny Lee on the practice ground, but luckily James Hahn was on hand to give him a near-replica of his PING G-425 driver.

Hovland has barely put a foot wrong from off the tee box and he now has a great chance to become the first player to successfully defend his title from the previous year at Mayakoba.

Viktor Hovland birdies the 18th for a -9 today @WWTAtMayakoba.

He leads by two. pic.twitter.com/ia8OHVfMrj

"That was fun today," said Hovland after the third round in Mexico.

"Obviously, got off to a nice start and it was nice to have one of those rounds where you can kind of keep it going throughout the day instead of maybe slowing down towards the end there where, frankly, there are some tough holes.

Hovland began the third round three shots behind Matthew Wolff, but the 22-year-old quickly fell away with a 3-over-par 74.

Meanwhile, the 2021 Ryder Cup debutant Hovland made nine birdies in a bogey-free round to rise up the leaderboard.

The 24-year-old from Oslo is looking for his third win on the PGA Tour and he will be in the final group with fellow Oklahoma State student Gooch.