It appears a good night's sleep was not enough for the Postman to dust off a quadruple bogey at Mayakoba on the PGA Tour. 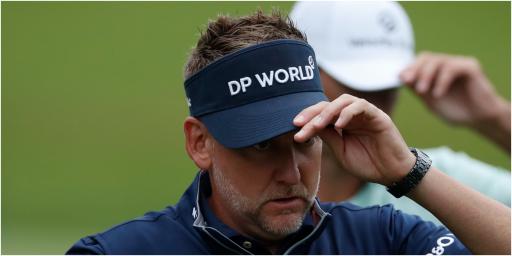 Ian Poulter probably does not want for anything in his life.

He's likely rich beyond measure, has had a successful golf career with many wins around the world.

Happily married, beautiful children and he gets to travel the globe with his hobby paying the bills.

Plus he's been the talisman for many European Ryder Cup victories.

But still at the grand old golf age of 45 he gets as frustrated with anyone about the game.

MORE: FAN PROVES WHY TIGER WOODS WILL MAKE A COMEBACK

Especially more so when he feels he sells himself short.

Poulter still appears to work as hard as anyone to try and hold on to his talent.

Father time is approaching but Poulter is not yet keen to turn his attention to the seniors' circuits.

He's never been a big hitter but what he lacks in distance he makes up for in his passion for the game.

This week on the PGA Tour at the World Wide Technology Championship (formerly the Mayakoba Classic) Poulter opened his week well.

Six birdies and one bogey saw him sign for an opening round of 66 at the par-71 at the El Camaleón Mayakoba Golf Course.

Everything looked like Poulter was destined to make another cut on the PGA Tour but then it all went badly wrong.

During his second round Poulter made the turn at 2-under par.

But then at the par-4 16th he recorded a quadruple bogey eight.

Then he made bogey at 17 and missed the cut 4-under cut by one.

It's fair to say Poulter wears his heart on his sleeve.

With this kind of drive you would be foolish to bet against him winning again in 2022.

But if he does make another quadruple bogey down the stretch to miss another cut, it's probably best to avoid him.