Tiger Woods made his first professional start at the Genesis Invitational in 1992 as a 16-year-old and it was clear he was destined for greatness. 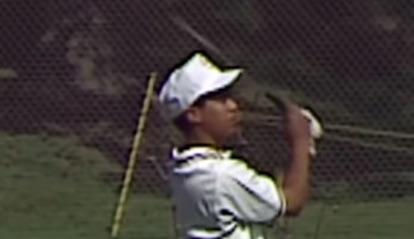 Tiger Woods made his professional debut at what used to be called the Nissan Los Angeles Open in 1992 as a young, budding 16-year-old.

Unfortunately, it wasn't the week to be for Woods. He shot rounds of 75 and 72 to miss the cut. His good friend Fred Couples went on to win the event that season.

Skratch Golf posted some fantastic footage of Woods on the driving range, striping iron shots on the practice ground at Riviera Country Club.

You can see by his swing, temperament and rhythm that he was clearly destined for greatness. His skill and ability at such a young age were freakish.

RELATED: PHIL MICKELSON GOES ON TWITTER BLOCKING SPREE | HAVE YOU MADE THE CUT?!

Even with one bad swing, a teenage Woods was frustrated with himself and seemed able to identify his mistake with that particular shot.

No doubt his father Earl was behind the camera watching him. It is incredible to think that from that day, Woods would embark on a career that saw 15 major championship wins and 82 PGA Tour wins.

That was the young man's only appearance on the PGA Tour that season and he played in the same tournament in 1993, but again, he missed the cut.

Ironically out of all Woods' wins throughout his career, he has never won the Genesis Invitational. He finished second in 1998 and 1999.

Now, the 46-year-old runs the TGR Foundation which now organises the Genesis Invitational. Woods is set to be on-site as a non-playing host of the event.

Later today, he will hold a press conference where he will no doubt field questions about his future and his intended targets for the PGA Tour season.

NEXT PAGE: PRINCE ANDREW SETTLES SEX ASSAULT CASE | IS THERE A ROUTE BACK FOR HIM IN GOLF?