Prince Andrew settles sex assault case | Is there a route back for him in golf?

Will Prince Andrew return to public life after settling a civil sexual assault case? BBC Royal Correspondent believes it will very hard for him. 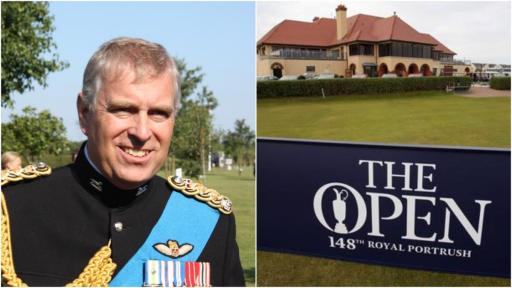 Just a day after the Duke's Course at St Andrews confirmed it would not be changing its name, it has now emerged Prince Andrew has settled a civil sexual assault case brought against him in the United States by Virginia Giuffre.

Ms Giuffre had been suing Prince Andrew, claiming he sexually assaulted her on three occasions when she was 17 years old, and that she had been sex-trafficked by convicted paedophile Jeffrey Epstein.

The allegations against Andrew had repeatedly been denied by him.

But a letter filed to the US district court on Tuesday said Andrew and Ms Giuffre had reached an out-of-court settlement.

The Duke makes no admission of liability but will be paying an undisclosed sum of money to Ms Giuffre.

RELATED: DUKE'S COURSE REFUSES TO CHANGE ITS NAME DESPITE PRESSURE

A statement included with the letter read: "The parties will file a stipulated dismissal upon Ms Giuffre's receipt of the settlement (the sum of which is not being disclosed)."

It said the duke would make a "substantial donation to Ms Giuffre's charity in support of victims' rights".

Andrew, 61, has also pledged to "demonstrate his regret for his association" with the late convicted sex offender Jeffrey Epstein by supporting the "fight against the evils of sex trafficking, and by supporting its victims".

He has also commended the "bravery of Ms Giuffre and other survivors in standing up for themselves and others".

So now the case has been settled, what will it mean for Andrew's future moving forwards, especially within the golf sector?

Probably not much in all honesty as bridges have been burned.

Andrew recently relinquished his membership with the R&A after becoming embroiled in the sex scandal, but his membership was not withdrawn unlike his other patronages that had been removed.

His association with the R&A was said to be "a private matter."

Andrew served as captain of the Royal and Ancient from 2003 to 2004, and his grandfather King George VI was also the captain in 1930. He was the sixth royal to have the honour.

The Duke of York is a passionate golfer and is said to have had a single-figure handicap at one stage. He was the patron of more than 20 golf clubs and his year as captain marked the R&A's 250th anniversary.

Yesterday the famous Duke's Course at St Andrews confirmed it would be sticking with its name in honour of Prince Andrew who struck the opening tee shot there when it opened back in 1995.

That is despite pressure from politicians and the public to cut their ties with the royal.

"We always take the views of our members extremely seriously but to date we have received no approaches on this matter," Old Course general manager, Phyllis Wilkie, told the Daily Record.

"We currently have no plans to change our course's widely recognised name."

Scottish Labour MSP Claire Baker responded: "In light of the very serious accusations levelled against Prince Andrew, it is only right that the Duke's course is re-named.

"This is major tourist attraction which supports the local economy of St Andrews and Fife in general. That's why it is of paramount importance that the reputation of the Royal and Ancient golf course is protected."

So where does Andrew go from here?

The Prince Andrew saga has hit new levels of deplorable. It literally cannot get any more grotesque.

"What of Andrew's future, could there possibly be a route back to a public role?" said Witchell.

"I have to say it's hard right now to see one, he's been shown to have had such poor judgement, such poor choice of friends, and the brutal fact is would anyone actually want him, would any charities or any regiments and so on want to be associated with him after all of this for all that there is no admission of liability.

"Perhaps the answer as he says at the end of this statement as he says 'to pledge to support the fight against the evils of sex trafficking and by supporting its victims', perhaps that offers the best and only route back for him."

NEXT PAGE: EX-ROYAL COP WOULD HAVE "KNOCKED OUT" PRINCE ANDREW OVER GOLF BALL CLAIMS