British golf fans have always welcomed Tiger Woods to The Open Championship and they hope to once more at St. Andrews in 2022. 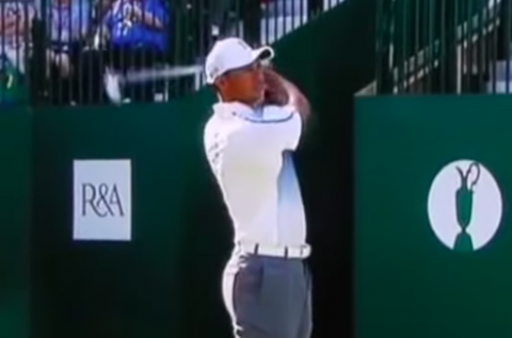 Tiger Woods stated in his press conference in the Bahamas last week that he would like to play at the 150th Open Championship in 2022.

Woods has won the tournament three times and he has lifted two Claret Jugs at St. Andrews, conveniently where next year's event is historically being held.

Tiger has produced some of his career-best performances on the links courses of Britain. In 2006, he famously neglected the use of his driver as he stormed to victory by two shots at Royal Liverpool.

The 45-year-old is capable of any shot. As we have seen in the footage of him hitting balls at the Hero World Challenge, the magic is still in those hands.

RELATED: TIGER WOODS GIVES GOLF REPORTER A MULLIGAN AFTER MESSING UP HIS QUESTION

Woods ruled out a full-time return to the PGA Tour, but he will be making fleeting appearances at various events and one of them could be The Open Championship in 2022.

The footage above is a shot that Tiger hit during one of his 21 appearances at the tournament. As you can see, Tiger's understanding of the trajectory needed on links golf courses was on full show.

Shot tracer is one of the best additions to golf broadcasting in recent years and without it, we wouldn't be able to see this superb power-draw by the 15-time major champion.

In the slow-motion video attached to this post, you can see the athleticism and flexibility that Tiger used to possess, but unfortunately, these features of his anatomy will evade him moving forwards.

The applause from the crowd as his name was announced on the tee box is something that we have missed at The Open Championship, as well as every other event on the PGA Tour.

But as many figures from the golf world have said, we have a form of Tiger back and we should all be grateful. The question is, will this form of Tiger tee it up at the home of golf next July?