Justin Thomas and Jordan Spieth star for U.S. but International team fight back

Jordan Spieth and Justin Thomas put on a clinic on Saturday at the Presidents Cup but the International side fought back before the Sunday singles. 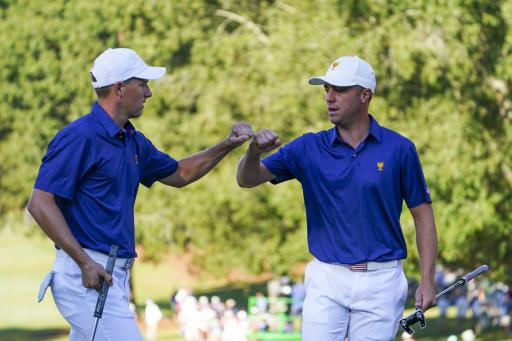 Jordan Spieth and Justin Thomas became only the third pairing to win four points in a single Presidents Cup as they shone for the U.S. side on Saturday as the International team showed signs of life.

Thomas and Spieth - who have provided moments of pure comedy at Quail Hollow Club in Charlotte - continued their brilliant run by comfortably beating Sungjae Im and Corey Conners 4&3 in the Saturday morning foursomes.

The U.S side - led by Davis Love III - began the day with an 8-2 advantage and by the time the morning session had finished they were up 10-4.

Adam Scott and Hideki Matsuyama beat Cameron Young and Collin Morikawa 3&2 while K.H. Lee and Tom Kim defeated Scottie Scheffler and Sam Burns 2&1 to put points on the board for Trevor Immelman's International side.

Related: Watch Scottie Scheffler hit a shank off the face of the planet at the Presidents Cup

But Tony Finau and Max Homa ensured that the U.S. side had a considerable lead going into the afternoon fourball session after seeing off Si Woo Kim and Cam Davis 4&3.

Both sides have been hit by the emergence of the LIV Golf Invitational Series, but the International team have appeared to be considerably lacking in fire power, unable to draw on the experience of the 150th Open winner Cameron Smith.

He said that his side would not give up and that was evident in the aforementioned Kim's play. The 20-year-old accepted a special membership on the PGA Tour then earned his full playing rights after capturing his maiden victory at the Wyndham Championship.

His enthusiasm at this year's Cup has been something special, although he's been having trouble with his trousers.

What happened in the afternoon session?

Spieth and Thomas saw off Matsuyama and Taylor Pendrith 4&3. The match was won when Spieth chipped in from just off the green at the par-4 15th hole.

"Winning points for your team, getting to celebrate and kind of embrace the crowd, you can't beat it," said Spieth.

"Our team rooms the last few years have been spectacular. [We have] never gotten ahead of ourselves and we don't plan on it," added Thomas.

The duo now have a combined record of 8-2-0 in Ryder Cups and Presidents Cups. Their only losses came at the hands of an inspired Tommy Fleetwood and Francesco Molinari at Le Golf National in 2018 and Sergio Garcia and Jon Rahm at Whistling Straits last September.

The other pairings to also complete the feat of earning four points in a single Presidents Cup were Tiger Woods and Steve Stricker in 2009 and the International pairing of Louis Oosthuizen - who might have LIV buyer's remorse - and Branden Grace in 2015.

In the third afternoon match, Im and Sebastian Munoz defeated Tony Finau and Kevin Kisner 3&2 to make the score 11-5.

Then the aforementioned Kim came up clutch with an incredible birdie down the 18th hole in the first match.

His playing partner Si Woo Kim was struggling on the hole but Kim hit a towering fade into the green from 239 yards to set up a chance to win the match against Schauffele and Cantlay.

Schauffele had hit his approach too hard and his golf ball sailed over the back of the green. Then a spectator picked it up. Bizarre.

Schauffele managed to get up and down for par but Kim sank his putt to win the match and went absolutely ballistic, making the score 11-6 in as the tide began to turn.

As this was going on Davis and Adam Scott - who was absolutely flushing it - took a 1UP lead over Billy Horschel and Sam Burns at the 17th hole to present the opportunity for the International side to take the session 3-1.

Every player had a decent look at birdie at the long par-4 18th. Horschel's effort was too high. Davis tidied up his birdie to clinch the match and win the session for the International side, bringing the score back to 11-7.

Captain Immelman said he was "almost in tears" at seeing the incredible fight back.

But this thing could get interesting.