Max Homa got his first ever ace on the PGA Tour during the third round of the Arnold Palmer Invitational at Bay Hill. 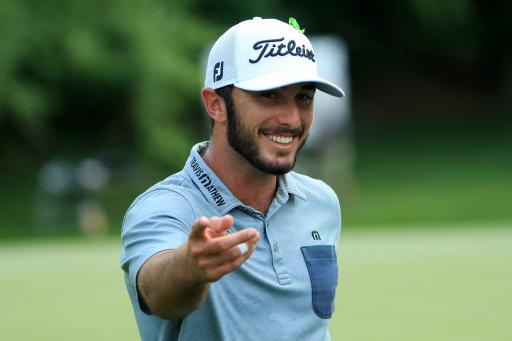 Max Homa grabbed his first ever ace on the PGA Tour at the Arnold Palmer Invitational, then celebrated with a little jig.

Home run Homa took aim at the 14th hole at Bay Hill and delivered a wonderful pass at the ball with his typical, beautiful tempo.

The sound of the contact was clean. A little thump. The pin was tucked away on the front right of the green. Hard to get at.

It's an aggressive pin position but Homa proved up to the challenge. The ball landed, took three bounces and rolled on in.

Cue elation. Cue celebration. Cue a little jive from Homa, one of the best follows on social media.

For years Homa has been roasting peoples' swings on Twitter. Now when they come for him, he'll have a bit more ammunition.

More: Have you seen these shocking putts?

Homa constructed an opening round of 69 and followed it up with a 74 to make the cut at Arnie's place.

He was well out of contention but this will be a sweet bit of history to look back on. It came during the third round.

Homa, 31, is a three-time winner on the PGA Tour. He won the 2021 Genesis Invitational and collected the trophy from his hero Tiger Woods.

He also won the Fortinet Championship last year and also the claimed the 2019 Wells Fargo Championship.

From over par to under par in one fell swoop. What a brilliant moment for Homa.

Congratulations on the ace and keep up the impressive dance moves and keep roasting swings on social media. The PIP will one day be yours.

Watch the hole-in-one below...