Viktor Hovland made a stunning eagle from the bunker to re-take a two-stroke lead at Bay Hill and these commentators loved every minute of it. 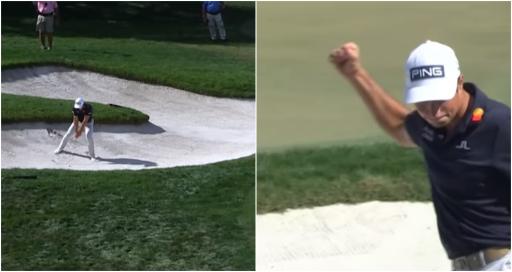 Viktor Hovland holed out for an eagle from a bunker during the third round of the Arnold Palmer Invitational on the PGA Tour.

And it's fair to say these Norwegian commentators enjoyed his heroics at the sixth hole at Bay Hill as all hell broke loose.

At one stage on the back nine Hovland had a four-stroke lead and looked all but set for a standard Sunday stroll to his fourth PGA Tour win.

It really was a day of high drama at Arnie's place. Max Homa grabbed his first hole-in-one and did a little shimmy.

That beautiful pitching wedge at the 14th hole bounced three times then rolled in beautifully.

Elsewhere, Matt Jones had one of the best hissy fits we have seen in recent memory after he lobbed his putter in a lake.

More: Matt Jones throws his putter in the lake at Bay Hill!

More: Rory Sabbatini withdraws from API, but refuses to leave

Clearly, that putter needed to die and he laid it to rest at the 11th hole. "I'm done, I've had enough with it," he said, walking off in a huff.

Rory Sabbatini also was forced to withdraw. He was 8-over par after 13 holes. But he refused to leave the course.

Instead, he soldiered on admirably and was on raking duties for his playing partners.

But this. This was our favourite moment of the day courtesy of the Norwegian broadcast.

Listen here as they went absolutely bananas as he holed out for eagle and gave it a little fist pump.